Early last week on a sunny Sunday, full of chocolate from the SF Chocolate Salon, I headed over to Pier 48 to take delivery of a loaner production Riptide R1 Elite. I’d previously ridden the Riptide when it was still in prototype phase and had some thoughts about it at the time, so was excited to try the production version and see how much further along Eric and company had gotten on their flagship product. 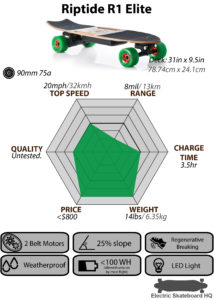 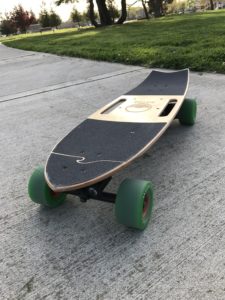 The base hardware has not changed since the prototype. The same fun kicktailed deck is present, with all the same maneuverability and agility as the prototype. It’s important to note that there is no concave on the deck so it’s not as comfortable as it could have been, but it’s still very serviceable and not a bad ride overall. As usual with inexpensive boards, skate hardware is somewhat lacking as the stock bushings left me wanting. However, it’s trivial to replace them with something much more conducive to your own riding style. I did not get a chance to try the wheels on the standard version of the Riptide, so I can’t comment on that, but the ABEC 11 wheels that came with the Elite performed admirably. Oh, did I mention I love the kicktail? 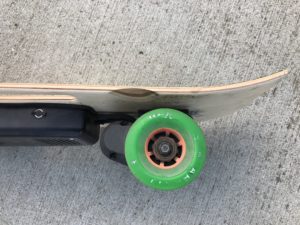 Make no mistake, I quite like the look of the board as a whole. It’s small, cute, and dorky. Just my thing! 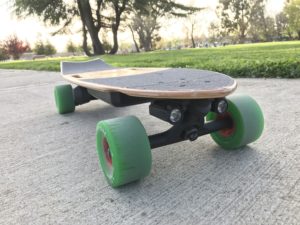 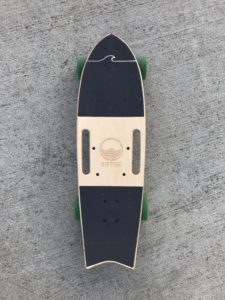 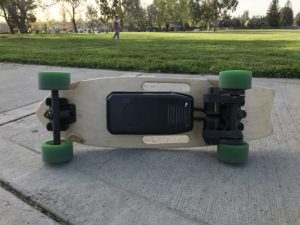 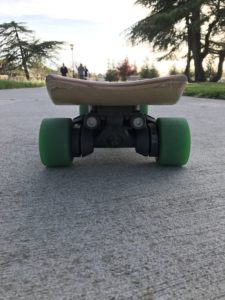 The electronics that are in the Riptide, however, are very obviously geared towards the casual rider. The thing is, the Riptide Elite is just… OK. Acceleration is just OK, braking is just OK, and remote responsiveness is, unfortunately, just OK as well. You won’t find any performance here, so if you’re looking for a shortboard with power, you should be looking elsewhere.

Now we must talk about the remote. The remote is the same generic nano remote you can find almost everywhere. This isn’t necessarily a bad thing, as it’s a tried and true remote commonly used by manufacturers and DIYers alike all. Not fancy, but definitely gets the job done. However, for whatever reason, the Riptide’s setup has somehow unintentionally introduced latency to the control scheme. On other boards I’ve tried with similar remotes, latency has not been an issue. Response has been immediate. On the Riptide however, it performs OK most of the time, but sometimes, when releasing the throttle, the board will keep accelerating a little bit more before actually stopping acceleration. This happens just often enough for me to be concerned. I’m not the only one concerned about it either, as other experienced riders corroborate my findings. I’ve mentioned it to Eric so he’s at least aware of the issue, but I haven’t been able to reproduce it reliably. The same thing happens when braking as well. It’s very curious.

As part of my reviews, I perform a series of measured, purely technical tests on review units. These tests are meant to push the units to the extreme that their electronics can handle and reveal any problems that may have not been revealed by simple riding tests. Technical tests are done under the most favorable conditions possible.

Takeoff on smooth, flat ground on all modes was pretty normal and nothing special. However, once in a while, the curve is slightly different. It’ll take longer to get up to top speed or take shorter, suprising you and making you lose your balance slightly. Takeoff up a hill past around 5% grade, however, induces something I call “cogging motor syndrome”. This really just means that you will have a bit of a lurchy start. The issue is easily remedied by kickpushing to start up a hill, but should be noted anyways.

My speedometer said around 19MPH when full battery and 17MPH when not, which is close to the advertised top speed for the Elite. Riptide states that the top speed of the Elite should be 20MPH. Close enough.

In my prototype review, I’d mentioned that I thought the brakes were pretty good. Unfortunately, at the time, I was not able to see how it handled for heavier folks. I’m hereby correcting my previous statement to “Braking is pretty good… If you’re not on the heavier side.” It’s adequate for me, if a bit soft, though it will *not* stop you down a hill if you’re heavier. A friend of mine got on it in the middle of a downhill section of my test route, and actually accelerated while on full brake. He did not stay on it for very long. This is unfortunate for any board as braking is of huge important at the speeds electric skateboards usually travel at, and the lack of strong braking is usual detrimental to safety. I recommend purchasers of this board to practice foot braking as your life might depend on it one day. I was able to talk to Eric about the braking, and here’s what he has to say about it:

“Ahh I’m glad you got to spend some time with it! That’s funny you ask that, a lot of people say the brakes are too hard and take getting used to. We picked a level that could be used by a first time esk8er rather than making than as hard as we would prefer”

I would tend to agree that softer brakes are easier to get used to. However, I’m not too sure if softer brakes should be the norm. Most beginners trust their lives to the brakes, assuming that they can always rely on them to stop properly. Soft brakes such as the ones found on the Riptide might not perform how those beginner riders expect…

As part of my acceleration tests, I do a series of full accelerating and full braking to test responsiveness, acceleration/braking curve, and power delivery. Unfortunately, the curve issues I highlighted in my prototype review still exists. Fortunately, if you’re used to bracing for acceleration and braking, it should mostly be a none issue.

There are wheel wells on the bottom of the deck that allow for sharp turns. The kicktail helps immensely as well as you can put weight on it to bring the nose around sharply. Very nice!

Riptide meant for their first line of boards to boil down to two things: safe and convenient. Here’s what Eric, Riptide’s founder as well as founder of Shredlights, says about them:

“It’s really meant to be a utility board for getting around. I was riding the Boosted everywhere (class, groceries etc.) and I noticed that almost 50% of the time I had the Boosted, I was actually carrying it. Then I always wanted a kicktail for quicker maneuvering. I bought one of the first Arc Boards and the carbon fiber deck was wayy to [sic] flexible and the wheelbase was too short so it was sketchy to ride at 20 mph; which is why the R1 has a longer wheel base and wide deck”

It’s true. The Riptide is a great board to carry around due to its built in handles, small form factor, and relatively light weight profile. Maneuverability is great, with the kicktail providing the ability to sort of lever the nose around. Eric is also correct in saying shorter wheelbases tend to make sketchier riding at higher speeds. The Riptide line has a nice wheel base, not too long and not too short.

Where it falls flat is user experience. It’s the little things, the small niggles, that prevent me from fully liking this board. Braking is ok, but should be stronger. Acceleration curve is OK, but should be more consistent. The remote handles OK, but the lag that happens once in a while puts just the slightest damper on the experience.

It’s a shame because it’s otherwise a good product.

So what’s my verdict? Are you going to be traveling short distances with minimal hills in environments that require maneuverability? If so, this is the board for you. If you want top notch UX and peak safety, the Boosted Mini might be a better bet.

One thought on “Riptide R1 Elite. So what’s the verdict?”