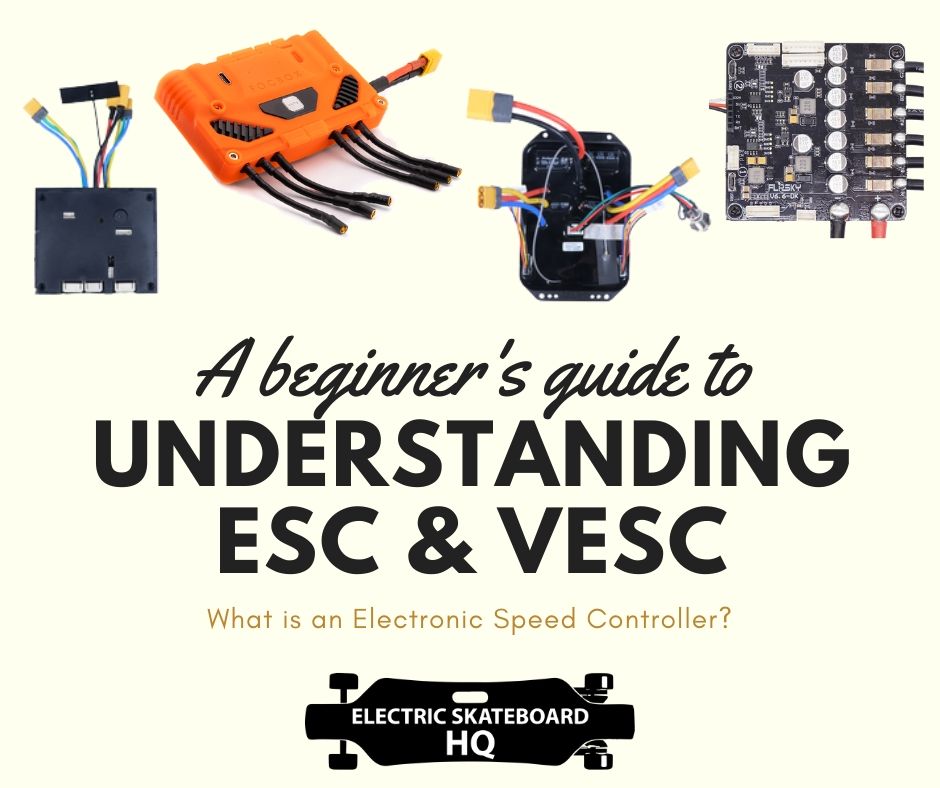 Electronic Speed Controller (ESC) is the brain of your electric skateboard. It tells your motor how hard to push or how strong to brake.

An ESC can cost somewhere around $60 to $100, and they are most definitely not created equal. Good ESC can handle bigger battery packs, as reflected by “Series” of battery they can handle and the Maximum Ampere it can handle.

On the contrary, cheap ESC will fry if you try to hook a battery too big for it.

A good ESC is more powerful as it allows bigger ampere and/or voltage to pass through it. A poor ESC might bottleneck your built no matter how big of a motor or battery you hook it up with.

A good ESC is a set-up to give smooth control both in acceleration and brakings. Poor ESC might be unpredictable, inconsistent, or jerky.

The availability of unique features such as kick-to-turn-on, Bluetooth, and apps to read and adjust settings are all dependent on the ESC you get.

ESC and VESC can be either ‘single’ – which controls a single motor, or ‘dual,’ meaning one ESC controlling both motors. Of course, most of the boards now have dual ESC, as it is cheaper to have 1 ESC rather than 2. However, if you use 2 single ESCs to power 2 motors, and if one of your ESC goes bad, you still have a good one.

Any old-timer will tell you that there was a time where the ESC we use are mostly RC car ESC and wasn’t explicitly made for Eskate. This has long stopped being the case with the emergence of Chinese budget brands and the LingYi ESC and Hobbywing ESC that they made popular.

Both of these ESCs are made for eskate and perform a lot better in an eskate than RC car’s ESC. There is absolutely no reason to go for an RC car ESC if you are building an Eskate with ESC.

You can buy both LingYi ESC and Hobbywing ESC from eskate vendors such as MeepoBoard.

With that said, there is little sense to build a DIY if you are not aiming for something substantially more powerful (you could very well buy a production board for less effort and money), and this brings us to the VESC.

Other ESC worth looking into:

VESC® was a type of ESC specifically designed for electric vehicles like the Eskate. It was designed by Benjamin Vedder, an engineer from Sweden, and hence the name, Vedder ESC. While he is generous to make this an open-sourced project, he partnered up with Trampa, who patented the VESC trademark, which meant all other manufacturers had to remove “VESC” from their product names.

Traditionally, VESC was often the most expensive part of a build, but the price has come down a lot more recently, especially with the popularity of ‘Dual VESC.’ Now a Dual VESC can cost somewhere from $150 to $300.

Why is VESC so great?

VESC is excellent because it allows tons of customization. It allows you to control the torque of the board by adjusting the current output to the motor and current input from the battery. It allows you to customize the acceleration and braking curve so that the board behaves exactly as you want it to while braking and accelerating.

You can also set some limits to protect your ESC, motor, and battery such as:

VESC is programmed using the VESC-tool. To learn more about programming a VESC, you can take a look at our walkthrough. (coming soon…)

Basically, nowadays, the VESC isn’t that expensive with the emergence of budget brands such as Flipsky, and serious DIY builds have no reason not to use VESCs.

Industry leaders in VESC have to be the Enertion’s FOCBOX and FOCBOX unity. It is pretty expensive but more refined than most other options. It also has a pretty long wait time. 2-3 months ETA from the order date.

Recently, however, Enertion Unity has received quite a bad rep for having faulty units and also for very delayed shipping time. So for those who don’t want to brace uncertainty until the issue cleared up, look for other options:

If waiting is not for you, Flipsky‘s VESC is another widely used and cheaper option with the added benefit of being in stock most of the time.

VESC comes with two main versions. Version 4 and the newer Version 6, which saw some improvement. VESC version 6 generally allows higher series and currents than the Version 4, but for regular street builds, any VESC of version 4 should suffice. However, keep in mind if you buy a VESC with the reference 4.12 design, running FOC mode may break the VESC easily.

Below are the most commonly use VESC:

The industry leader in VESC. Arguably the most refined. Used in premium DIY brands such as Lacroix, Bio boards. Infamous for its long wait time. However, as mentioned, recent batches of FOCBOX Unity seems to be ridden with problems.

Probably the most economic of all VESC. Suitable for most street builds.

A Good alternative to FOCBOX Unity. Only a little bit cheaper, but always in stock.

Other VESC worth looking into:

Do you know any other good VESC options that should have been added to the list? Or do you have any trouble with your ESC/VESC that you would like to warn other people about? Let us know in the comment below!

If you are buying any DIY part, do check out our “discount code” page as we might very well have affiliated discount code for some of them! 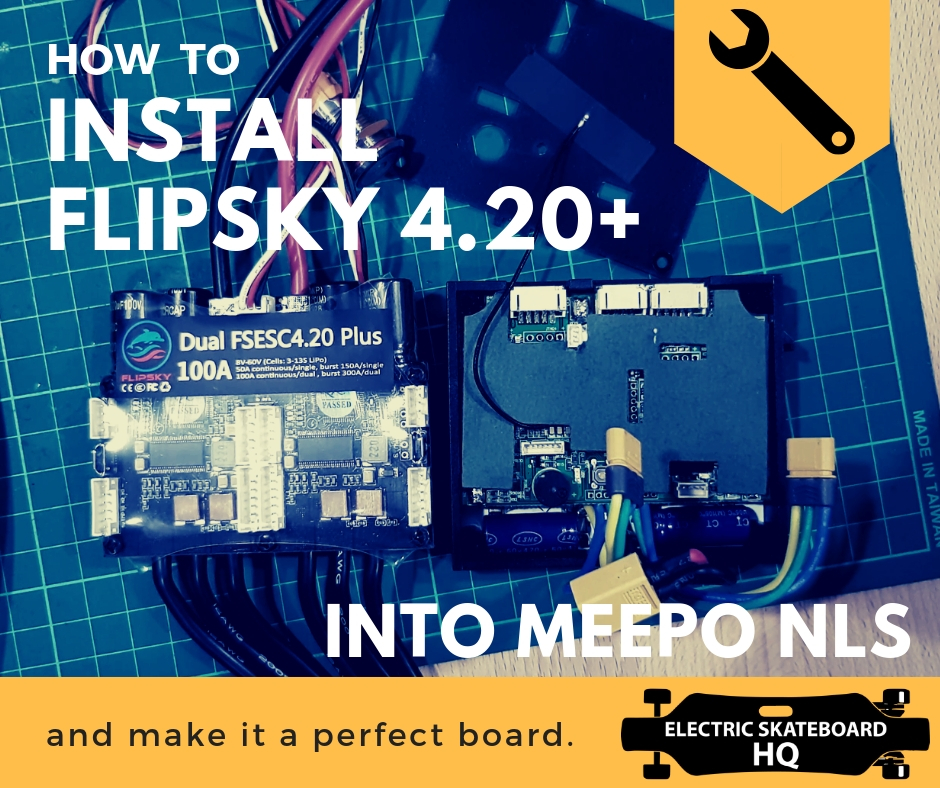 In my Meepo NLS review, I mentioned that I have installed Flipsky FSESC Dual 4.20 plus into my NLS and it has completely unleashed the potential of the board.

Besides improving the smoothness of the acceleration and braking (they are both now perfectly smooth), Flipsky ESC also unleashed a stronger torque and hence faster acceleration.

powered NLS now dusts Backfire G2T in a drag race. It’s not even a contest.

I’ve received a lot of message on how to install Flipsky into NLS. Though most are just asking about the settings, I decided to write the full tutorial for those who never installed a VESC prior to this. For those who are just looking for the VESC-tool settings that I used, just skip to the end of the post.

If you are not a fan of reading and want to see a 7 minutes silent video of the actual footage on how we install this, you’re in luck! Click the link below.

Tools that were needed:

Remove whatever screws is in your way and remove the stock ESC.

power switch is bigger than NLS’s, and the stock power button can’t be plugged into Flipsky ESC.

We drill a bigger hole for the Flipsky power switch.

Flipsky FSESC receives a 6 pin connector for motor sensor while NLS hub motors use sensor connector with 5 pin head as it doesn’t have the temperature sensor.

We will have to convert the NLS hub sensor wires to a 6 pin sensor connector. As we don’t have an unused 6 pin sensor head lying around, we harvested the one that comes with .

After ascertaining the poles of the power battery power cable, we solder the XT60 (Male) connector to the power cable from VESC.

NLS hubs use MR30 connectors. You will have a lot of option to connect it to Flipsky ESC, including cutting the MR30 connector and solders the wires directly.

We solder the motor wires in this arrangement:
From left to right, it should be Blue, Green, Yellow, then Yellow, Green, Blue.
Of course, place a shrink tube in to seal the connection when the solder was done.

6a. Connecting the receiver (For Nano Remote)

This is pretty straight forward, connect the receiver to the VESC. You should plug into Channel 1.

6b. Connecting the receiver (For VX1 remote)

Plug everything according to your ESC version. You can refer to a photo from Flipsky’s website.

Solder the white wire to the red power cable.

Connect your ESC to a Window PC via a USB cable.
Run VESC-tools and update into the correct firmware version.

Run the input setup Wizard to configure your remote.
(VX1 remote doesn’t need you to do this)

Alright! You are done!
Happy riding!

Check out our Sponsor Flipsky for your DIY needs:
https://flipsky.net/

Check out our article review on Meepo NLS:
https://electricskateboardhq.com/meepo-nls-next-level-sht-almost/