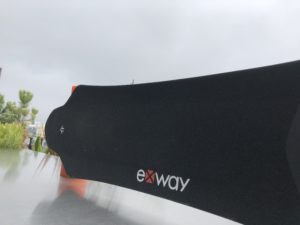 So What’s The Rub?

Many recreational vehicular hobbies follow a similar pattern of development. They almost always start out with a small group of super passionate people who manage to shoehorn something together that’s fun and exciting and gets the adrenaline going. Then, more of the same sort of DIY minded people come together, sharing expertise and experience, until there’s a sizable community.

With the beginnings of market saturation taking place, the race to drive down the price while upping the quality starts. The main drivers in the beginning are usually boutique manufacturers who make high quality but expensive vehicles. Then as soon as there’s a market for such gear, the manufacturing wheels begin to turn in the East. Low budget, cheap products begin to pour in, saturating the market with wares. It usually takes the target audience a little bit to adapt. Those who will settle for the cheap products do, and those who want high quality and have a big budget continue to purchase expensive, quality products, or simply DIY.

I believe this is the stage at which electric skateboarding as a hobby is currently. At the high performance, high price end, we have Evolve Skateboards, Boosted Boards, Metroboard, and similar. At the low performance, low price end, we have the Meepos and Teemos of the eskate world. However, there’s a slowly emerging middle class that combines a sub $1k cost with performance, versatility, and quality. These boards are aiming to appeal to the section of the rider demographic who are willing to spend for more quality than one would get with cheap stuff but won’t cross the $1k line. Right now, there are very few players in this space. But manufacturers have been making moves, and already, Boosted Boards has all but cornered the market segment with their Mini series, with Backfire also trying to carve out their chunk of this space. But do they have a new challenger with Exway? Is the X1 a winning formula against the established heavyweights? 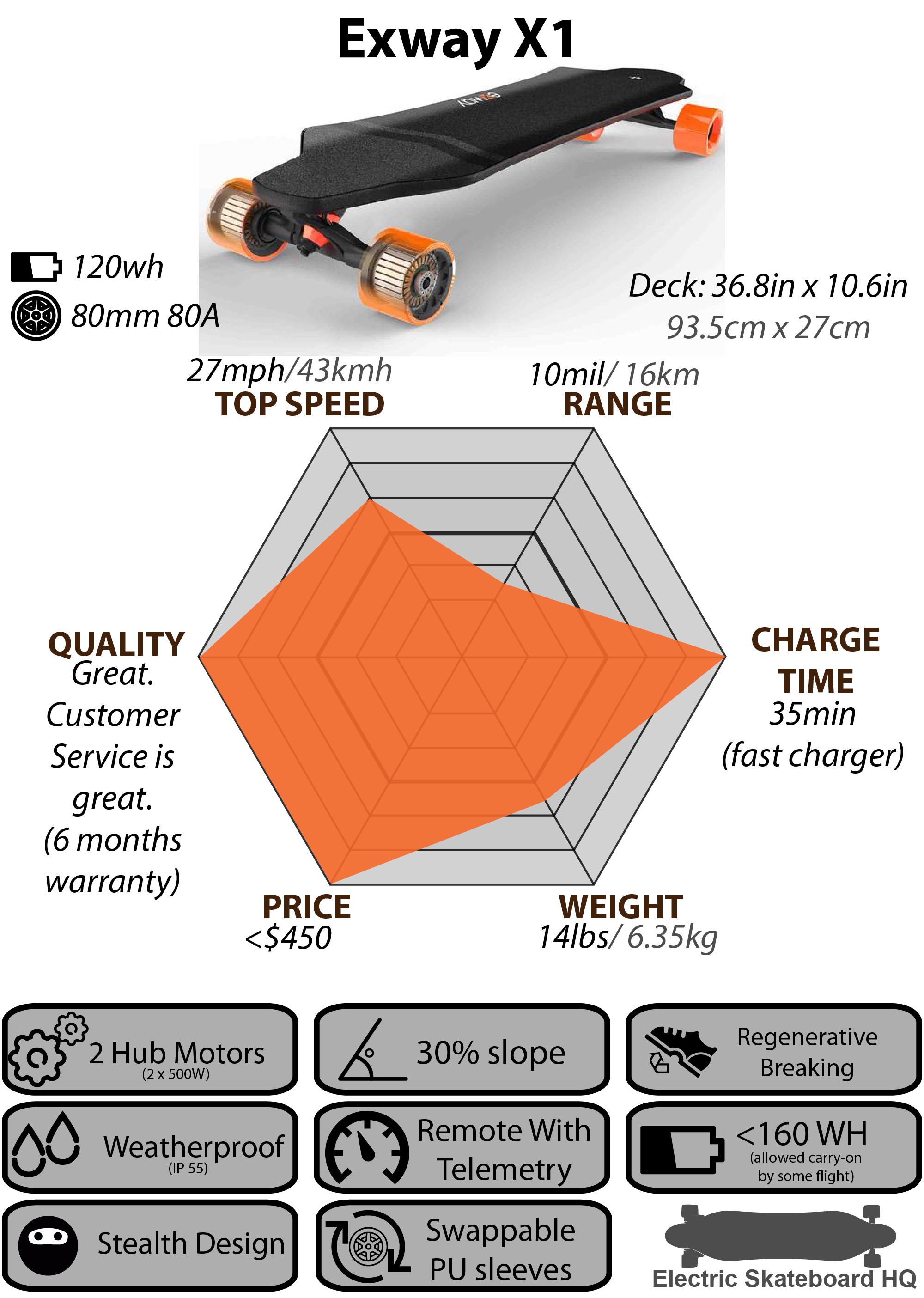 The hardware on the X1 is seriously nice. America sourced Seismic Aeon downhill trucks, 90A Seismic bushing, and a contoured, stiff multilayered (bamboo, CA maple, fiberglass, carbon fiber) deck layup makes riding at speed controllable and responsive. The dual electronic speed controller or ESC, a collaborative effort between Exway R&D and Hobbywing (A long time player in the hobby hardware category), is directly configurable, updatable, and capable of pushing 110 amps peak in “Variable Frequency Soft-start” mode, or what we typically call “FOC” mode. The dual 1000 watt hub motors are developed in house and feature easily replaceable urethane (comes with both 80mm and 83mm sleeves standard). All this is driven by a 12S li-ion polymer battery that’s integrated into the deck, allowing for a deceptively thin profile. It’s really quite an impressive package. 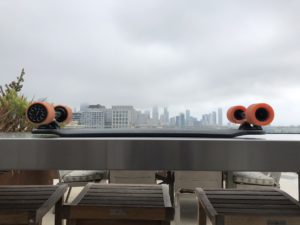 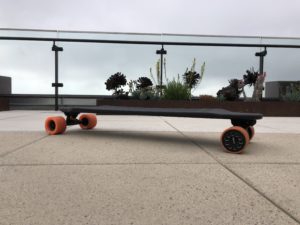 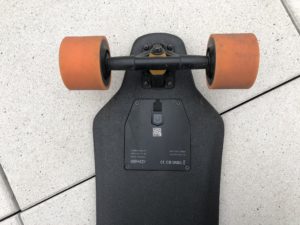 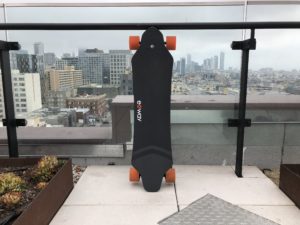 The Exway remote is really my favorite remote by far. It’s ergonomic, solidly built, extremely responsive, and finished in a nice, matte, soft touch material that’s just amazing to run your hand over. It also features a bright OLED display that displays live updating telemetry for both the board and the remote, and is easily viewable in direct sunlight. In addition to all that, Exway also built in nice details, such as the ability to automatically turn on the board when you turn on the remote, ability to display the charge level of the board while the board is plugged in, and a whole settings panel that allows for fine grain adjustment of throttle min and maxes, pairing with different boards, and some other stuff regular users probably shouldn’t mess with to be honest. The remote also features a vibration motor that alerts you to speed mode changes, low battery, and a variety of other things you should be aware of while riding. 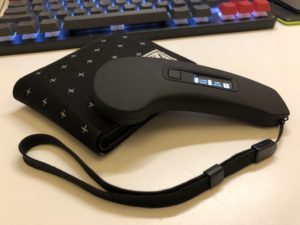 The user experience of the remote is great. There’s no lag at all, and control is precise and unfailing. Despite my best efforts, I was never able to make the remote disconnect no matter how many times I rode through areas that would usually make Evolve and Boosted remotes disconnect. This is the standard manufacturers should adhere to. 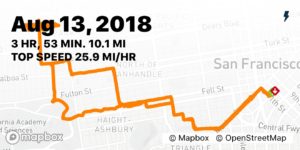 As part of my reviews, I perform a series of measured, purely technical tests on review units. These tests are meant to push the units to the extreme that their electronics can handle and reveal any problems that may have not been revealed by simple riding tests. Technical tests are done under the most favorable conditions possible.

It’s great. Deceptively quick, insanely smooth, and outruns a Boosted Stealth in casual testing. However, it’s worth noting that by default, the X1 actually comes with the highest speed mode, mode 4, set at only 80% power. This can be remedied by simply connecting to the board via the app and pushing the acceleration and braking sliders all the way to 100%. At 100%, I was very surprised at how mean the ramp-up gets. It’s still insanely smooth, but if you’re not careful you might slip off the back. Don’t ask me how I know this. Suffice to say, you will pretty much never want for torque.

Worth mentioning is the fact that as of mid-August, Exway has pushed out a firmware update for the board and remote that ups the max possible acceleration rampup. 100% acceleration is now even meaner.

Measured, my speedometer says 25mph going up a 5% hill grade. This is in line with Exway’s figures. It’s also notable that a friend who weights significantly more than I do (185 lbs) gets the same speed going up the same hill. In the same mid-August update I mentioned above, Exway has increased top speed to 27mph. That’s some speed.

When I leave the X1 at its “recommended max settings”, or how it’s set up out of the box, I get around 9-10 miles of heavy riding in a very hilly city (San Francisco) with a bit to spare. In my opinion, this makes it a good mid range board. If you’re looking for something long range that will take you 20 miles on a charge, this is not it.

The brakes are pretty great. As with acceleration, control is precise and smooth. This is very important, as braking is paramount to rider safety. Strong, predictable brakes means a safer ride, and the X1’s brakes certainly make me feel safe. As of the same software update mid-August, the brakes are now even better. Braking distance is now significantly reduced and max braking power has been increased.

As part of my acceleration tests, I do a series of full accelerating and full braking to test responsiveness, acceleration/braking curve, and power delivery. The X1 passes with no issues, and it still consistently impresses me with how nicely it handles this test.

Unlike most boards available at retail, the X1 comes with quality hardware. Seismic’s bushings produce no slop and stay self lubricated, which means predictable maneuvering at both max and min speeds. All Seismic Aeon bushings will work here, which means you can dial your trucks exactly how you like. Personally, I prefer Seismic’s 86A bushings since I’m lighter, but the stock 90A Seismic bushing the X1 comes with are likely the way to go if you’re heavier. 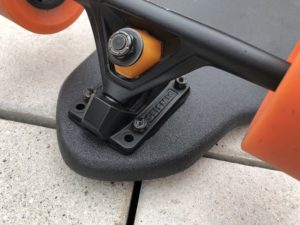 There’s really no debate here. The X1 is a great board to ride if you like speed and power. However, it’s also a great board if you want a thoughtful user experience. So many manufacturers ignore the user experience to their detriment, but here is where the X1 really shines. If you’ll allow me, I’m going to list a few things I really like about the X1’s UX:

As an aside, I’d like to mention that for the initial review unit, Exway USA asked me to abuse the daylights out of it to see if it would break. It didn’t break and I never had a problem with it.

A Word On Customer Service

Historically, Chinese manufacturers have not been great with foreign customer service. It can often be a huge headache getting support, especially for a product category like electric skateboards, which tend to break down more often due to the nature of the sport. I personally have seen and heard many horror stories from various people of unanswered emails, unintelligible “Engrish”, and even refusal of support. However, I’m happy to report that I’ve had no such problems with Exway USA. They’ve been prompt in their communications and interactions with me (not that they’ve needed to take any significant action) and have a retail presence in many local skate shops on both the East and West coast, meaning getting help could be as easy as hitting up your local skate shop.

So how does it stack up?

Well, I’ve had months of experience with the board now, and it’s performed admirably and held up exceedingly well to abuse. Since I’ve begun testing it, it’s gotten speed and control upgrades and new accessories (Exway now makes a shock absorbing grip tape for the X1). It’s become my go to board for running errands around the city. It’s slim, easy to handle, and easy to stow in tight spaces. It’s water resistant, easy to use, and even scratch resistant. I’m already chomping at the bit for a proper long range board from Exway with the same electronics and UX as the X1. But for $888 USD, what more do you want?

6 thoughts on “Exway X1 – The New Golden Standard of the East?”