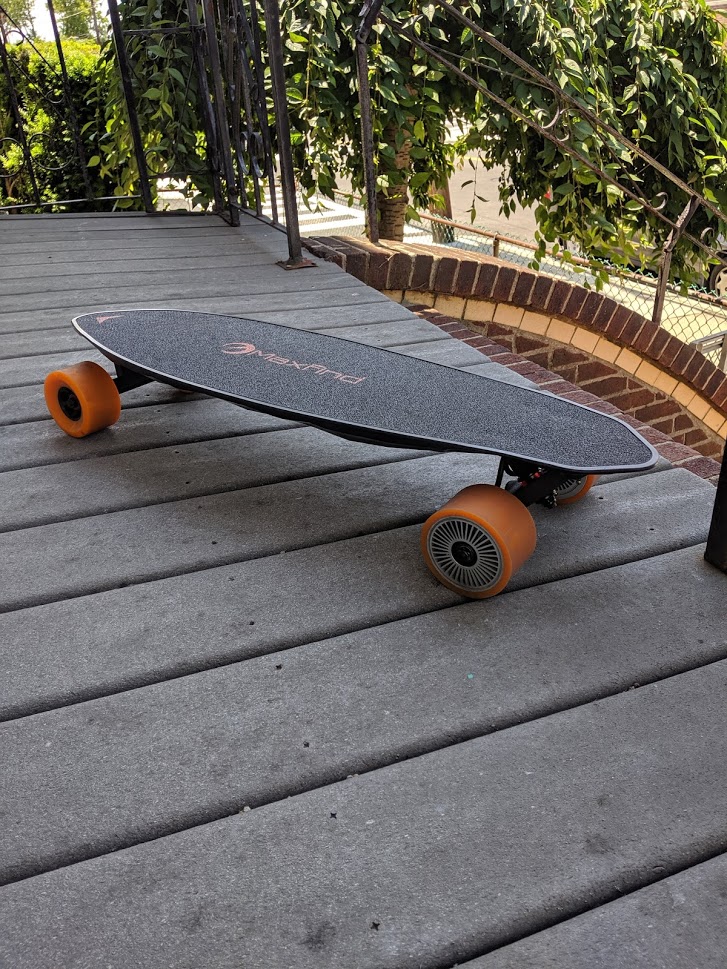 When you look at the MaxFind Max 2, you may be struck by its appearance. This board looks more like a piece of stolen alien technology or a prototype government aircraft than it looks like a skateboard. The all-black diamond-cut fiberglass deck is sleek, sexy and utterly smooth to the touch, and the grip tape is…not there.

Instead of traditional grip tape, MaxFind has elected to have their board’s riding surface comprised of a synthetic PVC material.

After riding it for a couple of weeks, I am confident in its ability to hold you to the board for light cruising. I would not take this board into a downhill race or attempt to do any slides with just this material for grip, but for fair-weather commuting, it should do the job while avoiding scuffing your favorite pair of sneaks.

While we are looking at the exterior of this board, get a look at THESE: 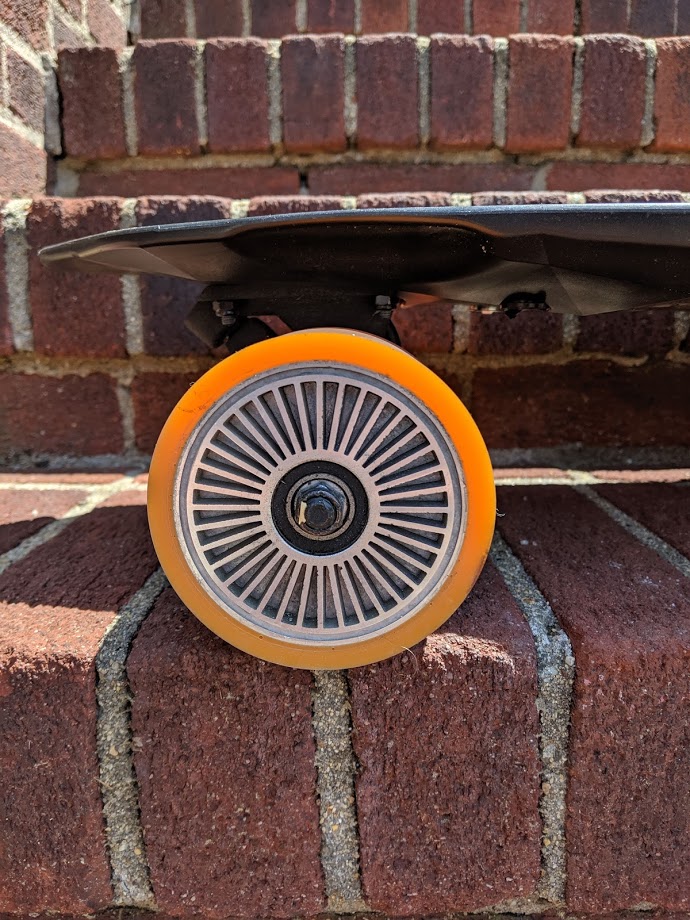 To keep up with the prototype aircraft aesthetic, it appears that MaxFind have elected to bolt two jet turbines to the back of their latest board. I have to admit that even I was a little intimidated by these formidable hub motors. It is worth noting that this particular model runs 90mm wheels, and it seems that a good 80mm of them is taken up by these enormous cheese-grater vents.

This all makes sense when you take size of the dual 1000w motors into effect. Motors like this need to be kept cool, and in order to keep cool they need to breathe, and breathe, they do! I was able to find a (long) bike path and run this board at full speed for nearly 2 minutes at 21mph without experiencing a reduction in speed. (MaxFind advertises this board’s max speed as 23mph, but I found the top speed to be a bit lower with my 190-pound frame on it.)

The big vents in the wheels should not be a problem for water intrusion however, as the board is IP65 waterproof. I was concerned about water getting into the hub motors when I first got the board, but was assured that the motors are fully encased inside the wheels. This seems to be the case, as I have not had an issue with moisture yet, despite riding this board on several wet days and this awesome bit of footy released by the manufacturer:

(Note: I do not condone trying to empty your home pool with this board.)

While looking at the beefy motors, your eye might also be drawn to the equally beefy trucks. I have to admit that these cast trucks look GOOD. The stealth black, sharp angles and geometry reminiscent of Caliber make for a seriously impressive truck, and I haven’t managed to snap or even really dent mine yet, so it looks like they can really take some abuse! 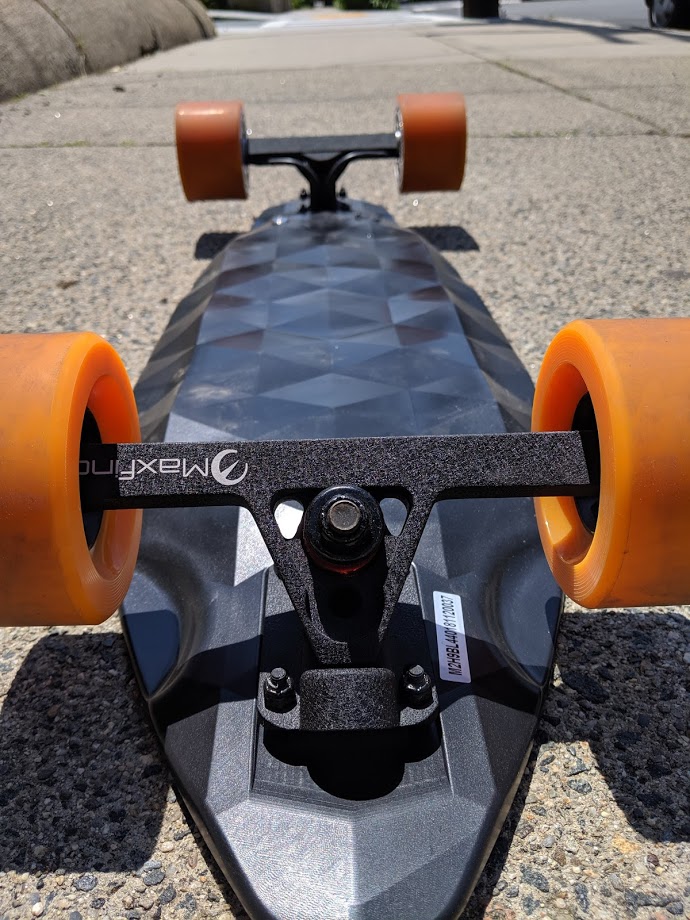 MaxFind could really benefit from some in-house skater expertise though. When my review unit arrived in the mail, the trucks were tight and unresponsive. After a quick switch up of the stock bushings (dead and reboundless), I had the MaxFind turning a bit better. I hesitate to make this setup more carvy, as the 90mm wheels are definitely a risk for wheelbite, one of my biggest skateboarding demons. Luckily, the unique shape of the MaxFind deck gives you some wheel-wells to help avoid this particular problem.

This is probably a good spot to talk about the ride. Right off the bat, I noticed that this board feels like it is geared HIGH. For those of you that do not drive manual cars, this means that the board has less torque at lower speeds, and achieves a higher top speed. I vastly prefer this type of ride to boards that have jerky low-speed acceleration *cough* WinBoard *cough* as it allows for a much smoother takeoff, and a higher cruising speed.

Once you fix the trucks, this board carves well, and rides really smooth on the huge 90mm wheels. I found myself really enjoying light carving, even at higher speeds, though the lack of concave on the deck was a little unsettling. I chalk this more to my downhill background than anything, I know that people have been beach cruising on pin-tails for a long time and carving without concave since before I was born. 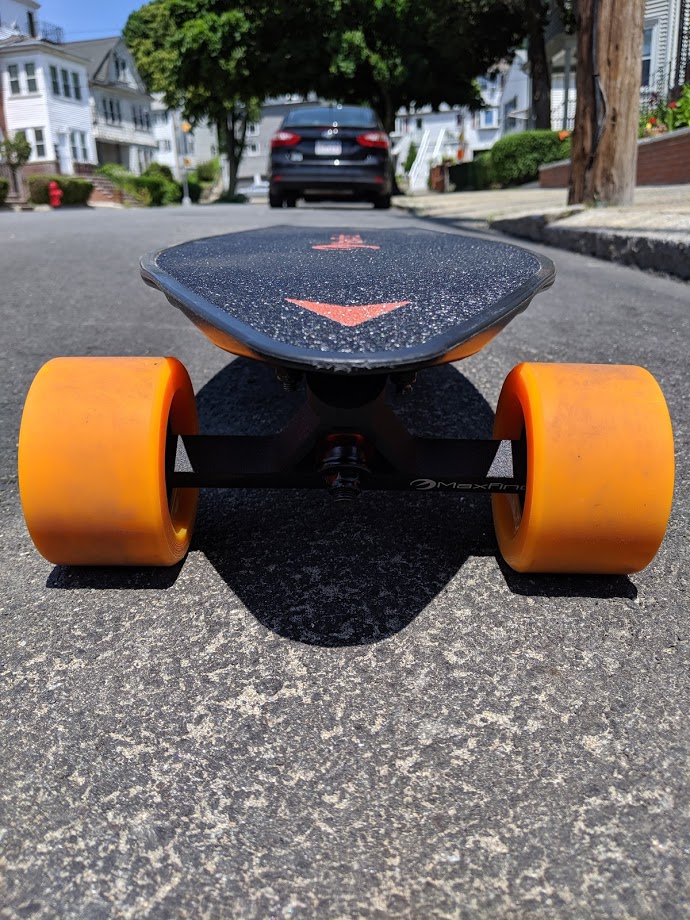 Speaking of board feeling, this board feels LIGHT! At 13.6 pounds, this bad boy comes in even lighter than its Meepo and Boosted counterparts. I loved having this board as my commuting buddy for a couple weeks, as it was exceedingly easy to jump on a bus, train, or up a flight of stairs without too much hassle. I will often not bring an eskate or EUC into the city when I am meeting up with Muggle (non-riding) friends, as I know that I will be schlepping whatever I rode around with me all day. This was not the case with the MaxFind, as it was easy enough to pop under my arm and walk around with.

NOTE: Before closing out this interview, I am compelled to note that the reports of support for MaxFind’s customers have been…sketchy to say the least. We have had multiple reports to EskateHQ of customers who have reached out to MaxFind about issues with their boards, only to be met radio silence. I did not have an issue with my board over the 3 weeks that I tested it, but the lack of support is something that should be taken into effect when making a purchase decision.

View all posts by Drew Frayre