Right after Meepo set the budget electric skateboard market on fire, one company jumped in almost immediately to offer an alternative. Enter Wowgo.

In the rough early days, Wowgo had been looked down upon as a mere imitator of Meepo, but the company endured and with time, established itself as not only a good alternative to Meepo, but to many, a superior option to the OG Meepo.

One product, in particular, was so good that it was hailed as the “Boosted-killer”, that’s the Wowgo 2s, the subject of today’s review.

Wowgo came onto the scene right after the meteoric rise of MeepoBoard, a company which is also their geographical neighbor in ShenZhen.

Initially, there was a lot of animosity between the two company, as both were trying to capture the lucrative budget market.

Finally, after 3 iterations, Wowgo ultimately hit a home run with the Wowgo 2s, which even inspired a series of copycats of its own.
It was considered to be the best Chinese budget board for a very long time, some say it still is. 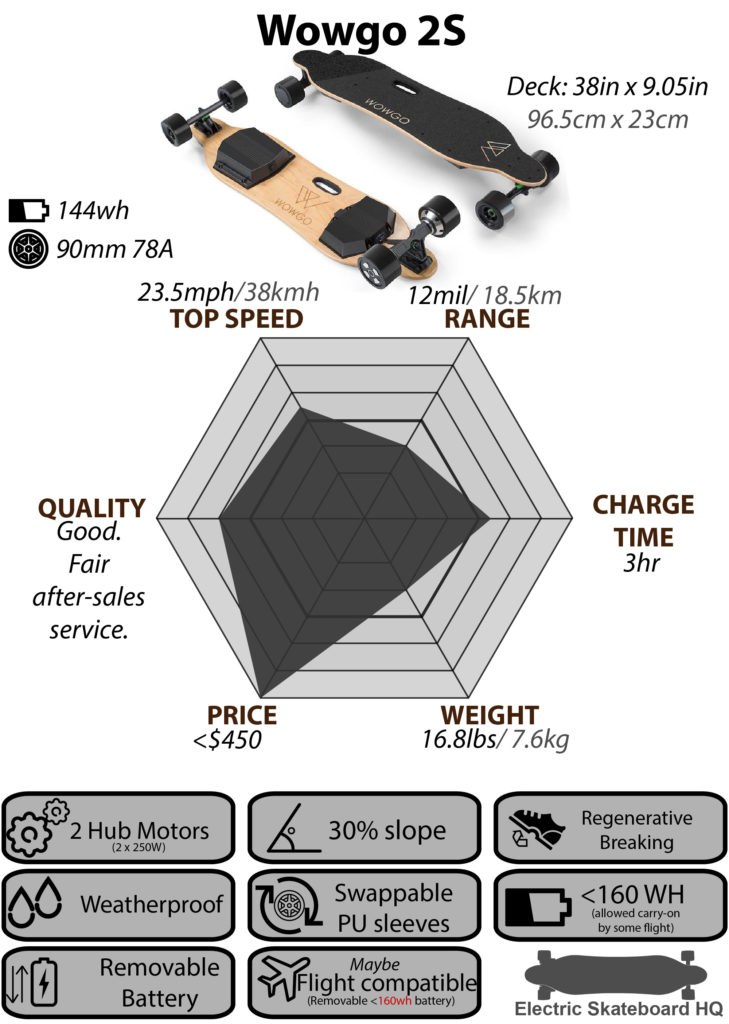 The Wowgo 2s has a pretty standard spec for boards in its segment: 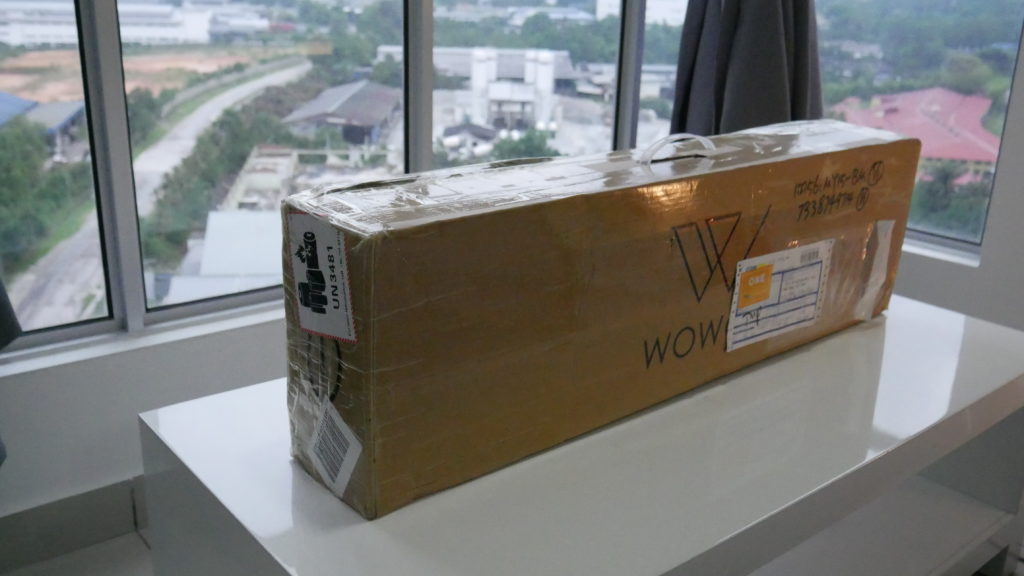 The Wowgo 2s came in a single box (not double boxed), but with a generous amount of padding put underneath the board. 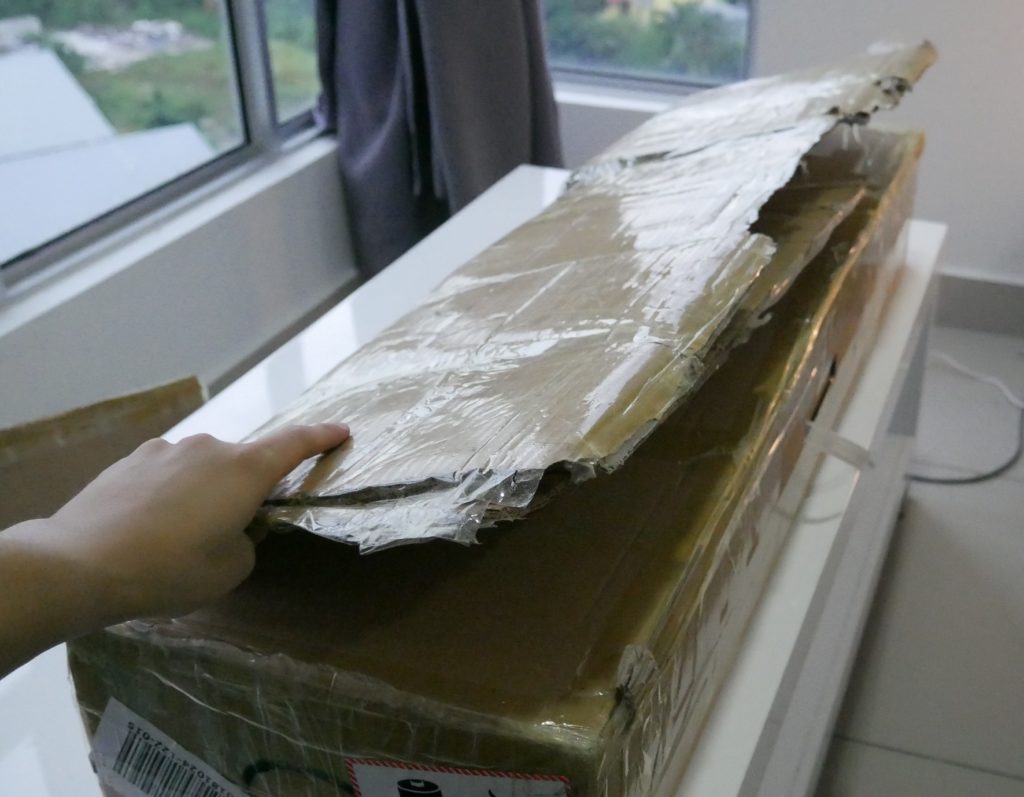 Inside the box, everything was placed neatly and the foam padding was also cut out nicely. One of the better packaging jobs that I’ve seen from the Chinese budget brands. 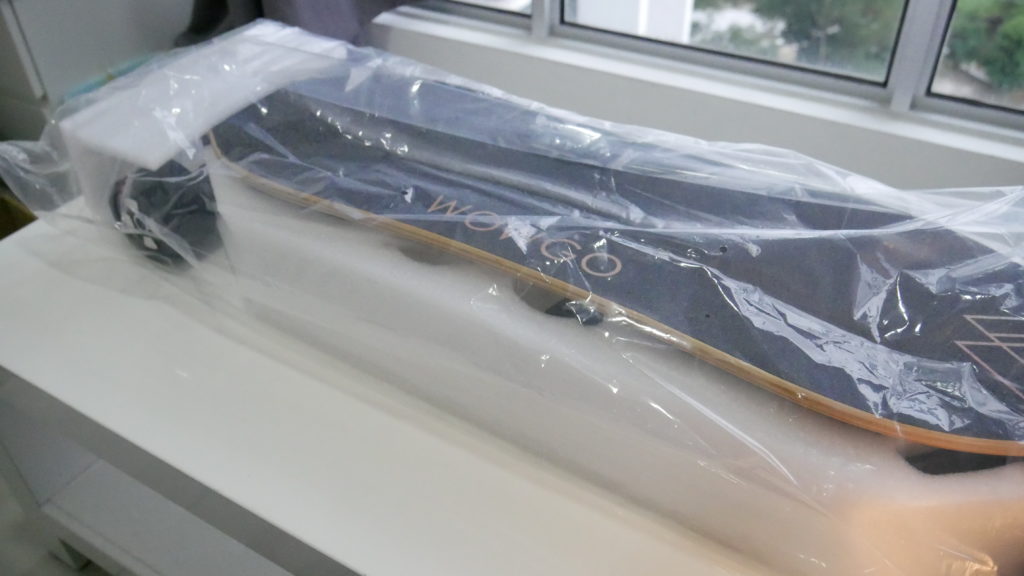 The other things in the box were the tail lights, name cards, wall hanger, charger, remote, skate tool and extra foam pad for deck swaps – pretty standard for a Chinese budget brand. 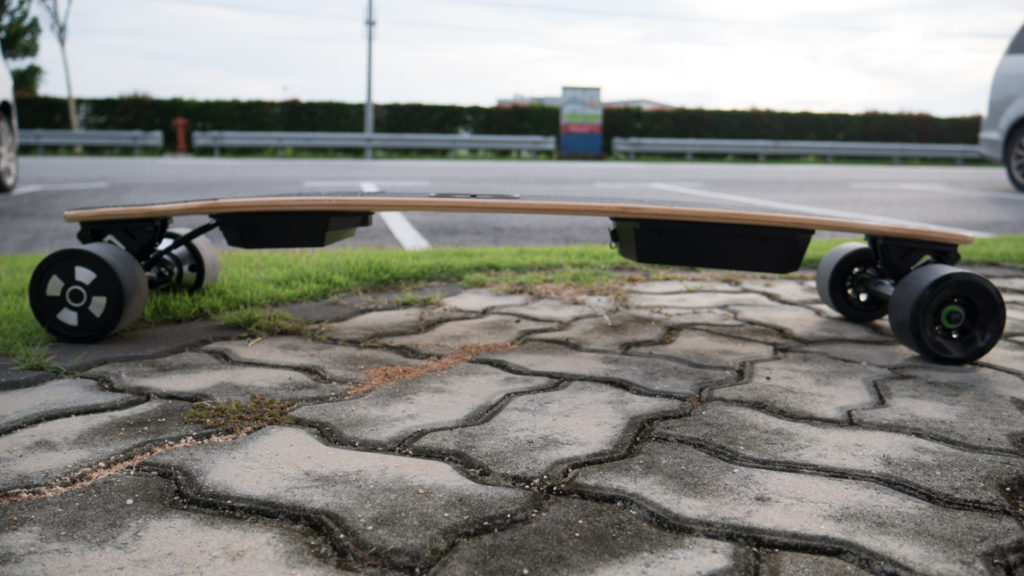 The Wowgo 2s use an 8-ply maple deck that is flat with no concave.

There is some camber to the deck and with that a little bit of flex.

Personally, I prefer a deck with more flex and concave.
I guess that’s why Wowgo makes it so easy to deck swap!

The best part of the Wowgo deck is the ‘two-texture’ grip tape. The grip tape on the back-end of the board is rougher, thicker and it not only feels nice to step on but also helps to cushion against vibrations coming from the rigid back hub wheels.

(The old deck of the Wowgo 2 had a single layer of bamboo with 7 layers of maple, which gave more flex but was prone to breaking. I personally wish they would have kept the old deck cause god knows the new deck could use a little bit more flex) 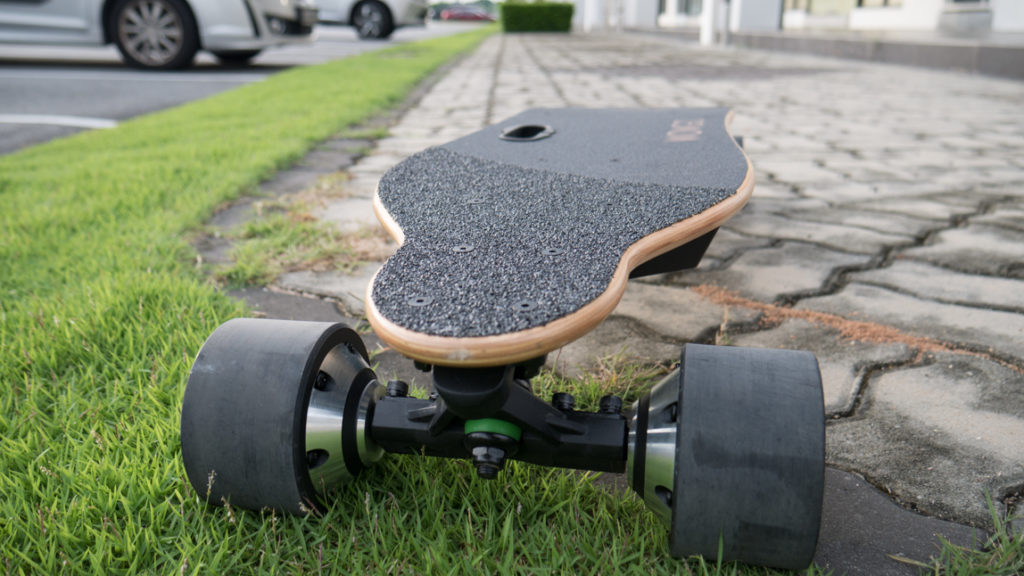 The Wowgo 2s started the trend of using metal enclosures after seeing many plastic enclosures break.

The “two-enclosure” set up allows the deck to have more flex without damaging the components. Something I wish the Wowgo 2s deck took more advantage of by offering a flexier deck.

Inside the enclosure, the Wowgo 2s is using the HobbyWing Electronic Speed Controller that has become much more common now.

Fun Fact: The Wowgo 2s is the board that made the HobbyWing Electronic Speed Controller famous, which is now found with Ownboard, Verreal, Backfire G2s and Harvoo boards.

Oh, and that laser engraving the logo at the bottom of the deck? Nice touch! 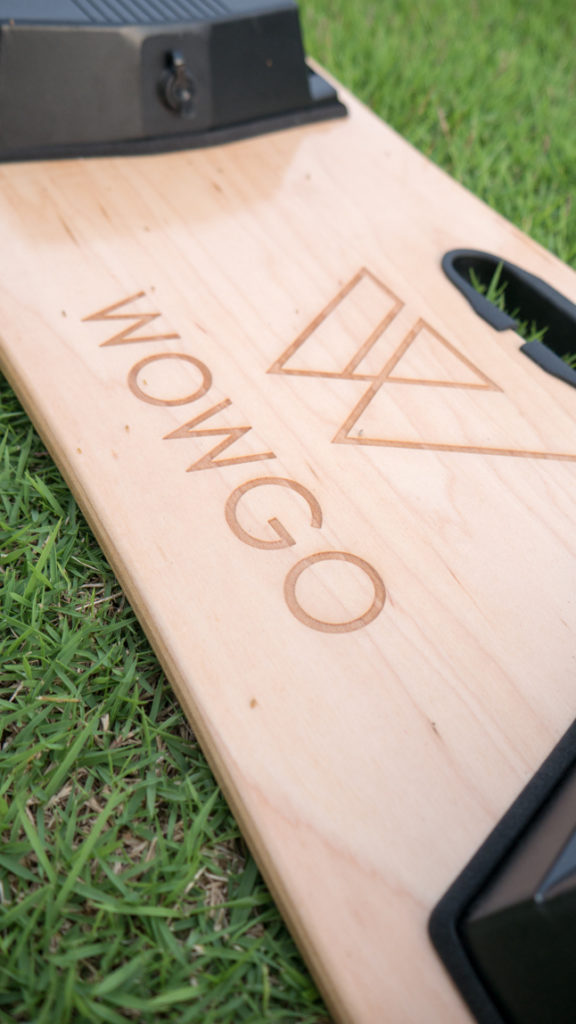 The Wowgo 2s uses 90mm wheels, which is the norm now.
90mm wheels will get you over most bumps and allow for riding on less-than-perfect roads.

You get to choose if you want the swappable PU on the hub motor or non-swappable.

My review unit had the non-swappable Pu sleeves and, to many, they are actually preferable as swappable PU sleeves can be more trouble than they are worth – considering vendors who use PU replaceable hubs often face issues like weird noises or screws popping off.

The 250w hub motors that the Wowgo 2s uses in the non-swappable PU version are the most common generic hubs we see from the Chinese market. Unlike most brands that started to put some graphic make up on their hubs, Wowgo has elected to keep its hubs plain.

They are known to work well so I have no complaints there.

The wheels come with generic Chinese bearings, not the best quality, but that is not the most important thing when you are not kick-pushing.

The Wowgo 2s uses a popular generic truck, which is  a common choice among Chinese budget boards.

Nothing exciting about this pair of trucks really. They turn okay and are fairly stable.
At least they are not known to break.

The soft green stock bushing that come with the Wowgo 2s are pretty good.
Bushing upgrade will always improve the ride quality but I wouldn’t say the 2s is in dire need of them. 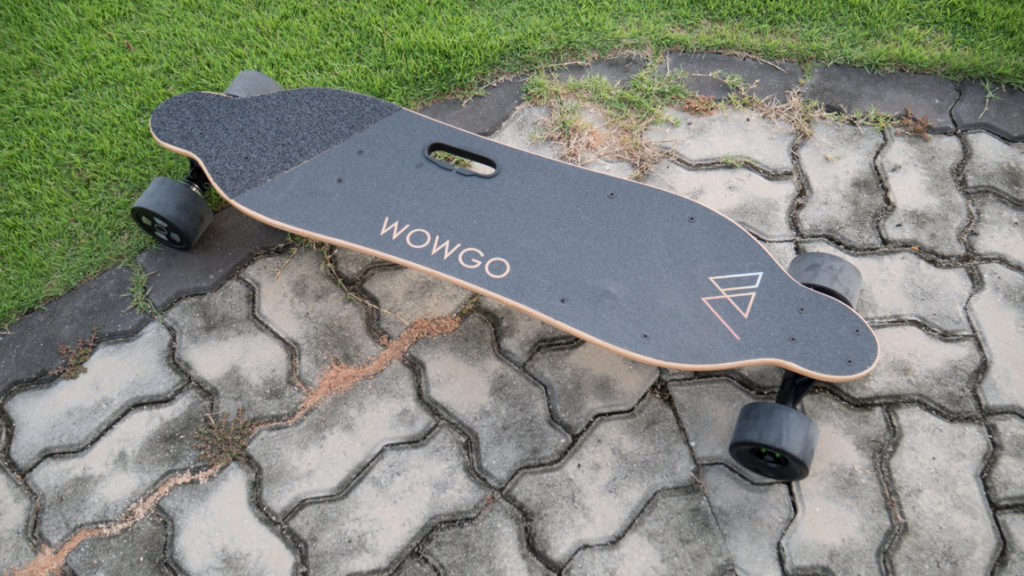 The Wowgo 2s is one of the more polished boards in the budget market.

From the unboxing experience to the polish of the board, the Wowgo 2s gets good marks.
I would expect as much from a brand that has been in the space since the beginning of the budget board craze.

There are 3 ride modes: 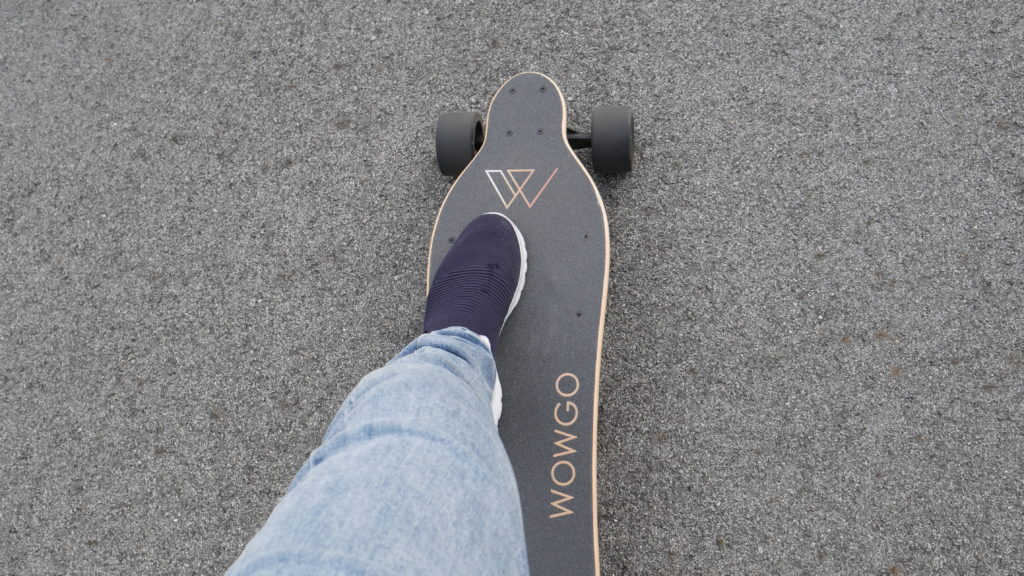 There are two very widely used Electronic Speed Controllers available in the Chinese eskate market.
The one used by Wowgo, Ownboard, and Verreal is the HobbyWing ESC.
The one used by Meepo V2P and the Yeeplay is the ‘LingYi’ ESC.

Wowgo 2s made the HobbyWing ESC famous, and with good reason.

HobbyWing’s ESC is known to be one of the smoothest available. Some say even smoother than the Boosted ESC.

The precision and lack of lag are what makes HobbyWing ESC special.
You can have the board accelerate as fast as you want or as gentle as you want by controlling the throttle. The board will react instantly and precisely.

This also allows more confident speed change when riding near the top speed. 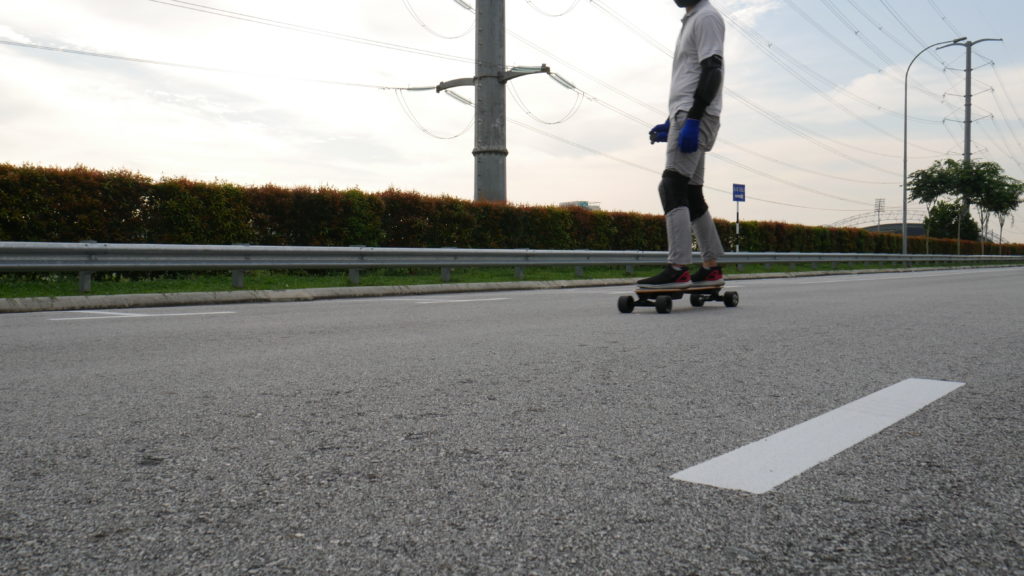 However, if you are an absolute beginner that has poor throttle control, you might be very intimidated by this type of zippy control when starting out. As your thumb is the only thing stopping your board from zipping off, nothing is going to stop you from pushing down too hard on the throttle and falling.
This is because, by the virtue of no lag and precise control, this ESC doesn’t introduce speed ramping to smooth out speed change.

Don’t worry, the majority of Eskaters end up preferring this type of control in the long run, it just takes some getting used to.

Braking on the Hobbywing ESC is one of the smoothest on the market, with the caveat of possibly being too weak for some as it can’t brake to a stop when going down an incline.
Generally speaking, most skaters prefer this kind of smooth gentle braking but it’s a ‘bummer’ when you really need an emergency stop. I recommend all skaters learn to footbrake in order to not rely solely on electronic braking.

The trucks were way too tight straight out of the box, making this a board that can just go straight!

It took quite a while for me to get to a configuration where the trucks were loose enough to give me a comfortable carve without being wobbly.

Otherwise, the generic trucks perform as expected, stable, not the most turny.

It gave a fairly stable ride at top speed.

I would love a broader deck with some concave too. I think that would definitely improve both the stability and carving experience. 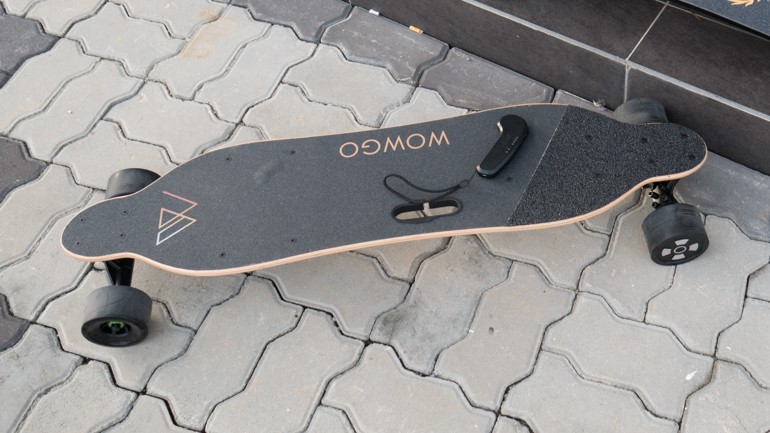 With a less-flexy deck and a hub motor set up, the Wowgo 2s is only doing the minimum to combat vibration.

Consider a wheel change, softer risers, and shoes with thicker soles if you are going to ride over rougher terrain. 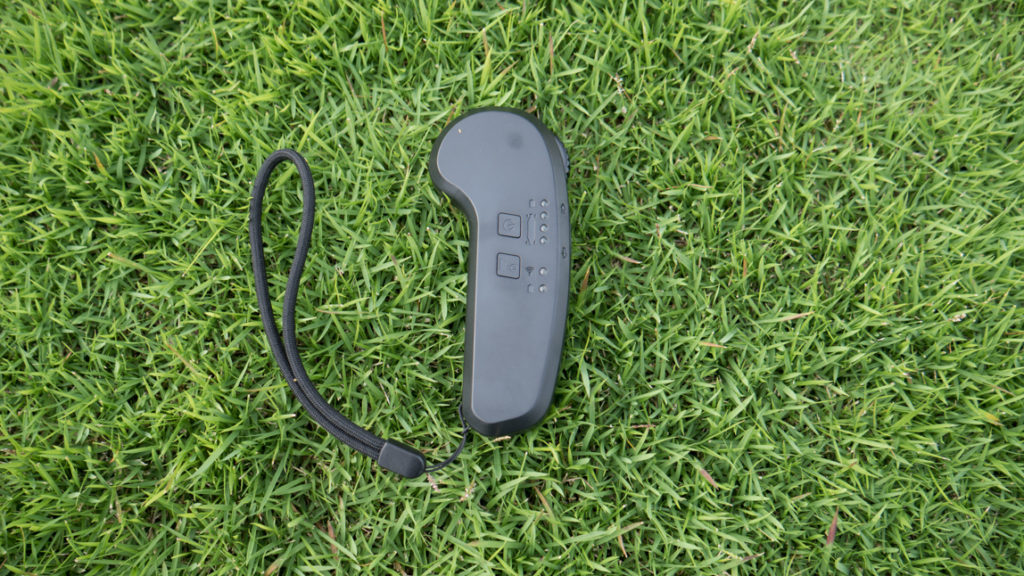 The Wowgo 2S uses the standard Hobbywing remote that many many other Chinese eskate companies share. It has been tried and true as a great remote.

It’s ergonomic and fits nicely in the hand.

The dial is springy with a good amount of resistance for better control and it has a reasonable amount of travel.

It is a simple remote without many bells and whistles and of course, no disconnection issues so far. 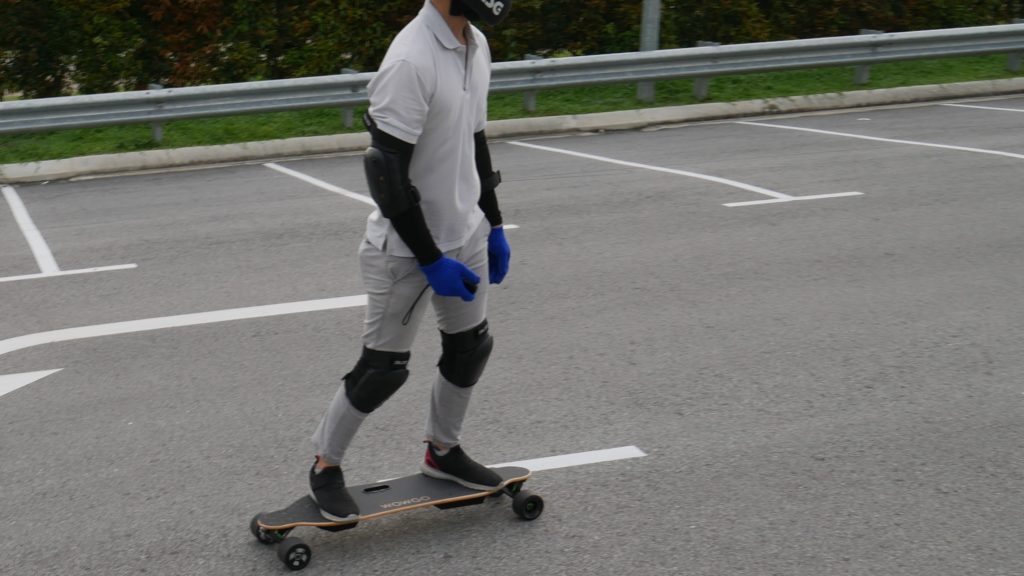 The riding experience on the Wowgo 2s is pretty well-rounded.

On the flip side, the “cup-half-empty” way to describe riding the Wowgo 2s is that the experience is pretty bland.

The speed control is safe and comfortable, the trucks allow non-aggressive carving, even the design is safe albeit without too much personality.

That is precisely the reason why the Wowgo 2S has been so well loved.
It is comfortable and feels safe in a well-rounded way.

The Wowgo 2s is on par in its capability with the other Chinese budget boards.
This means it has good value for money if compared to boards from any other segments. 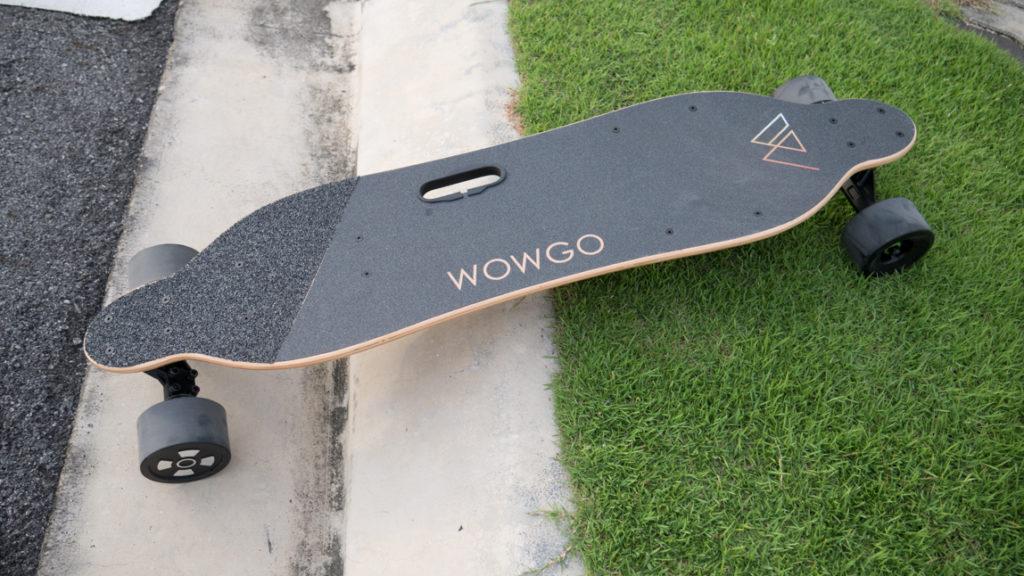 There are three battery options for the Wowgo 2s.

The board that I reviewed had the 4.0AH standard battery.

I did around 11miles (18km) before the battery ran dry, but your mileage might differ based on weight.
For reference, I weigh 165lbs (75kg) and although I tried to ride at top speed whenever I could, most of the time I could only maintain a 14mph or so speed (22kmh).

(A heavy rider who rides at top speed can only expect about 7.5miles (12.5km) on a single charge.)

On the last two bars of the battery, sag will set in and top speed will drop to around 18.5mph (30km).

This is a very ubiquitous hub motor setup that can be seen in many many Chinese electric skateboards which climb everyday inclines pretty well.

It passed the standard stop and go test on a 15% incline.

Customer service is a big part of any Eskate purchase, even for a “budget” brand.

Wowgo has been here for a while and has established a fairly good reputation so far.
All the budget brands from China, at this point in time, do have slips-up and complaints from time to time.

While not perfect, Wowgo customer service is generally good. Some slip-ups on repair, warranty and communications have been reported, but those are few and far between.

It is among the budget brands that I have confidence in. 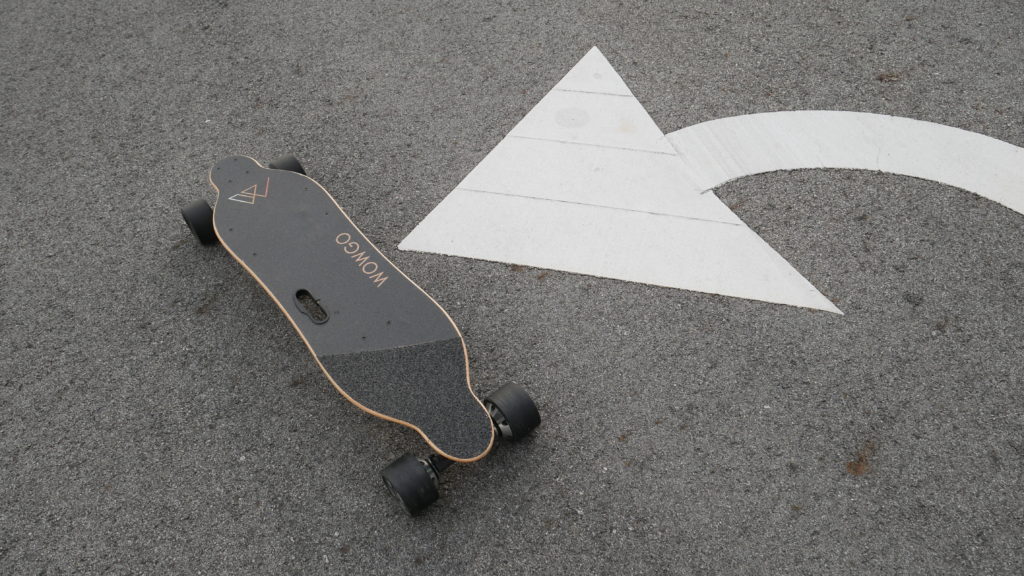 Retrospectively, the hype of Wowgo 2s during its arrival to the market is certainly justified.
Very smooth control, decent longboard parts makes it a very good choice for newcomers.
Seasoned eskater will either enjoy it as much or find it a very good base to tinker around with.

So, is the Wowgo 2s still the best affordable electric skateboard right now?

Although the initial advantage Wowgo 2s held has evaporated as competitors began to imitate its formula, Wowgo 2S certainly still is among the list of best budget boards to choose from.

That list includes boards like the Meepo V2, Ownboard W1s and Verreal F1, which are very similar to each other while also providing their own different special favors.

For those who are from a European country, you can choose to shop from a local dealer – Speedio.
Speedio is an Electric Skateboard re-seller based in the Czech Republic. While you do pay a little premium, they offer a 2-year warranty, local support, and fast 2-5 days shipping.

One thought on “Wowgo 2S Review – The first Meepo rival”