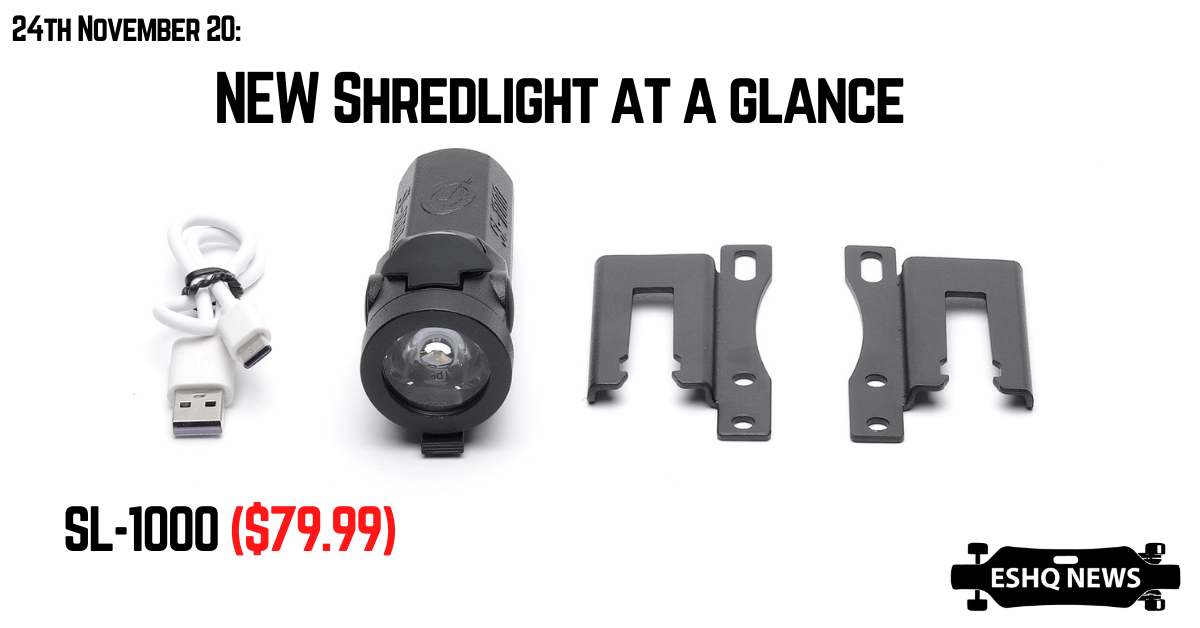 If you don’t already know, Shredlights has always been the gold standard when it comes to lighting solutions for electric skateboard (and also all PEV). Their staple product SL-200 is famous for their durability, brightness, easy and versatile mounting system, and Shredlights the brand itself are known to give outstanding after-sale service.

The only complaints that anyone ever had on Shredlights is the high price. So of course they responded by releasing the SL-1000, an upgraded version of the SL-200 that’s brighter and more premium! /s

It’s $79.99 for a SINGLE PACK and will only start shipping early January.

Jokes aside, it is really great to see Shredlights not resting on its laurels and continues to improve on an already great product. While I’ve never heard anyone complain about SL-200 for its brightness (it’s always the price), brighter is always better, isn’t it?

Being the brightest light out there is itself alluring, and when you combine that with the new sophisticated features that the SL-1000 now has, then you can’t really fault Shredlights for boasting about SL-1000 being the new standard for skateboard lights. Because it really is.

If you are interested in buying a Shredligths, be sure to check out our affiliate discount link here and uses code: “ESKATEHQ” during check out.
It will help you get $10 off and helps us out too. On top of that, you’ll be tagged as an Electric Skateboard HQ customer and probably be treated better. Cheers!

I don’t typically review accessories as I don’t usually accessorise a whole lot when I skate. The most I usually do are helmets, pads, and gloves. I think accessories are fairly personal things and people may or may not like something based on their own personal perferences. Pads and gloves are obvious items here. But what about lights? Lights are fairly universal with specs that can be objectively discussed. This is why when Shredlights asked if I would like to take a look at the new SL200, I agreed to write my thoughts down. So, without further ado, let’s jump right in.

Shredlights sent me a big box

Yeah. I thought they would just send me a pack but instead they sent me a big box of like a bazillion lights. There were Action Packs, Combo Packs, Night Ops Packs, and a buttload of mounting brackets for basically any kind of board. There was also a stack of stickers included which I certainly appreciated. Did you know each sticker on your board adds 5MPH to your top end?

Let’s talk about the mounting system.

The original Shredlights were possibly the most popular eskate specific lights in the world. The mounting system that screwed in using the existing hardware mounting screws on your board was innovative and convenient at the time. However, reports of light housing rubber tearing due to fatigue and lights falling off mid-ride started appearing. The double hook system itself wasn’t very easy to take on and off either, and was disliked by not a few people, myself amongst them.

So what’s changed there then?

Well, the mounting system has been completely redesigned. Folks, I would be very surprised if your lights fell off. It’s very rock solid. Instead of stretch-the-rubber push-pull-help-how-do-I-get-this-off-oops-I-tore-the-casing, it’s now a slide on and spring-loaded click-in. The new mounting plates are more robust as well. Thicker steel is now used, and the mounting plates now have a matte finish instead of the glossy black paint they used previously that liked to chip off. The variety of mounting configurations also impressed me. There are flat mounts, vertical mounts, and diagonal mounts. They’ve really thought of everything this time.

In addition to board mounts, Shredlights have also gotten into mounting on other objects and surfaces. In the Night Ops pack, they include a bunch of different mounting plates and clips that can stick onto various surfaces. The most notable thing is Shredlights have decided to use GoPro style pivots. This means you can buy any accessory that’s got a GoPro pivot system on it and it’ll fit right away. I think this is a great decision and really increases the usability of the product.

One last thing worth mentioning is the clip mount. This is possibly my single favorite improvement of the SL200, and is really what makes the product for me. The clip clips onto most anything, but I most often clip it onto the strap of my sling bag at night. The clip allows for near 360 degrees of freedom for you to angle the light, and is a great solution when riding with others as for me it is often annoying to have lights mounted on the helmet because when you look at somebody you might blind them.

Speaking of the lights…

All the best mounts in the world would be moot if the lights didn’t perform right?

Well, I’m glad to say they perform, and perform well. In my personal testing, my single backpack strap clipped SL200 effortlessly lit up the road around 20 feet in front of me with a constant-on beam to a satisfying degree. That’s a win in my book. On the highest constant brightness setting, one light lasts a few long rides before needing to be recharged. That’s another win in my book. So much better than the V1 Shredlights already.

Now, I don’t really like putting lights on my board, so I only have cursory first hand experience with board mounted lights. However, my good friend and esteemed videographer Justin Yee is an avid user of the V1 Shredlights, so I gave him a set of front and back SL200s to test on his eskating adventures. Here’s what he said (paraphrased):

“They’re way brighter than the original. It’s got really sick light patterns, and the new mounting mechanism is great. The new charge port covers stay great and don’t tear off. They light up a lot more of the road compared to the old ones, now you can actually see bumps and cracks and have time to react. The rear lights are also very noticeable. I have no complaints. Steep price but for the convenience and function I’d say worth if you like having lights on your board”

What we have here are bright, quality, durable lights purpose made for eskates and eskaters. At $100 for two front lights, two rear lights, and mounting brackets, it might seem a little steep. However I think what you’re really buying into here is an ecosystem, and personally I think it’s a really flexible ecosystem and a great choice of lights. I was certainly surprised by the quality and performance, and I think you will be too.

Click here to check out Shredlight!
Use promo-code: ESKATEHQ to get 10% off 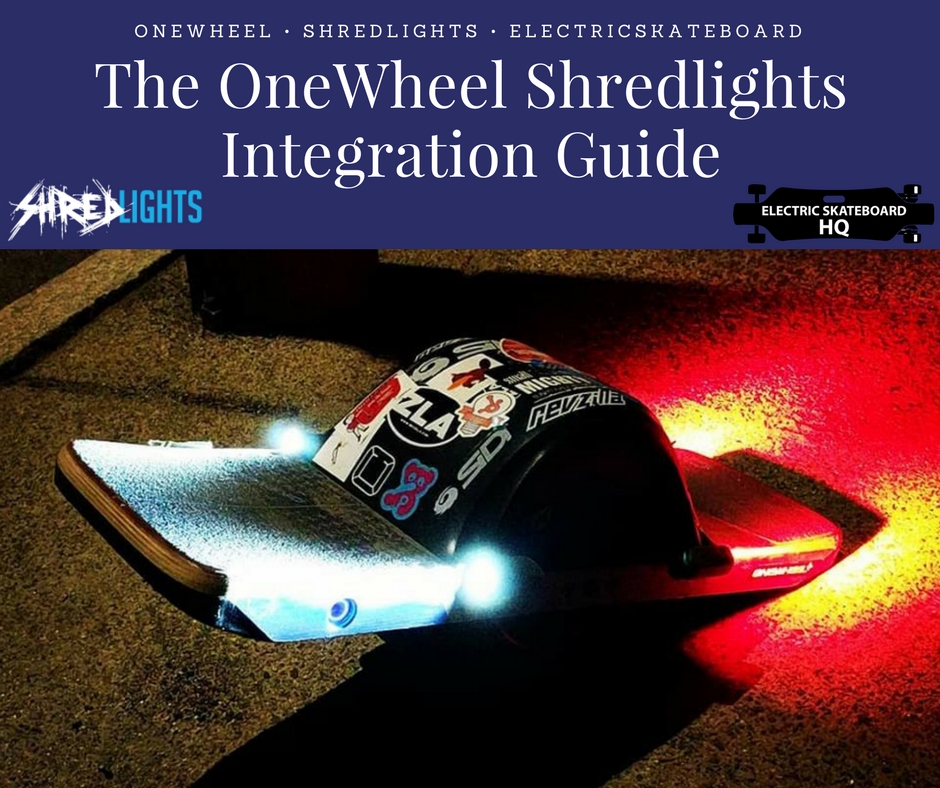 ShredLights, the lights designed specifically for use with skateboards, an industry standard, beloved by all.

When I heard that ShredLights would be providing EskateHQ with some lights to test, I was excited. I found my mind racing, trying to decide which of my skateboards to try them on.

The Boosted? No, too generic.

The Killswitch? I don’t ride it enough.

My slalom setup? I don’t know if the world is ready to see those lights wiggling towards them on the Boston streets at night.

What about my old standby commuter, the OneWheel? That’s ridiculous. ShredLights can’t fit on a OneWheel! 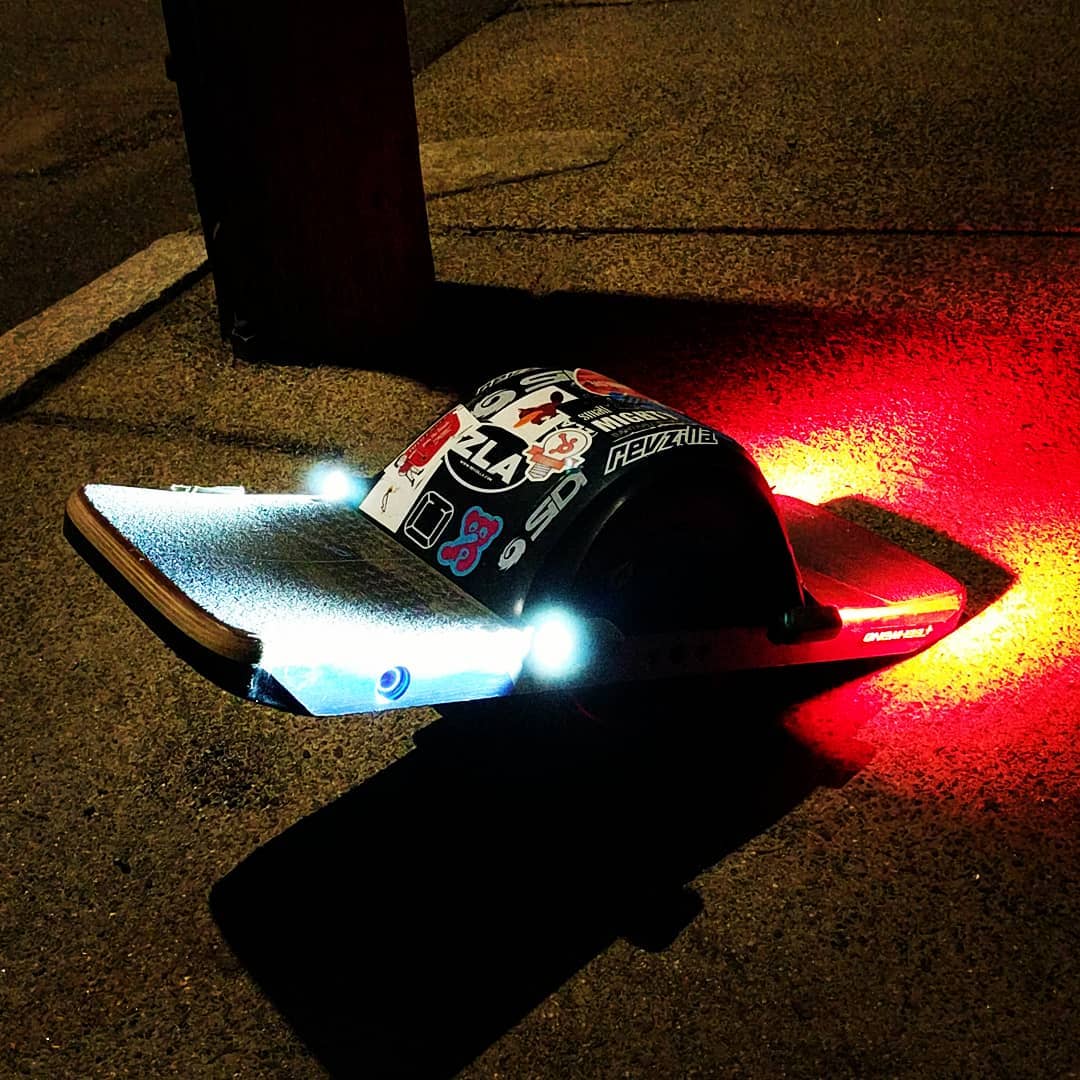 Using the most advanced technology available to us at EskateHQ, we have been able to combine these two unlike elements into some sort of eskate chimera, even more powerful than the sum of its parts…

And now it is time to teach the world how, without any modification, hole-drilling, or general screwing-with of your beautiful OneWheel.

It’s actually super easy. All you need is the OneWheel allen key, a ShredLights esk8 Combo Pack, 2 extra “stepped brackets” and about 20 minutes. (Use the “ESKATEHQ” promo code during checkout to receive a discount!) 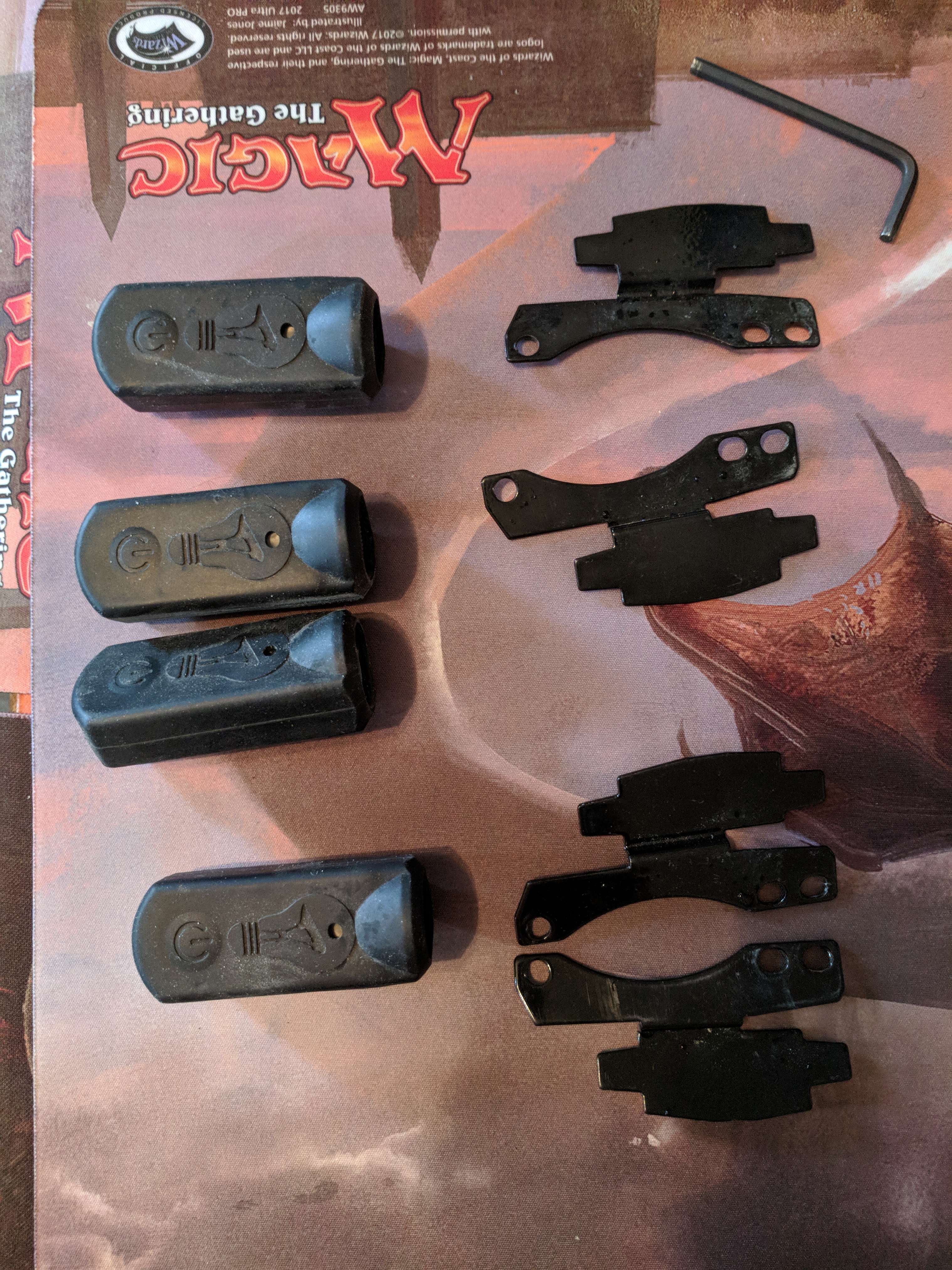 First things first, you are going to want to unscrew the middle screws on the board. The ones that normally hold on the fender. I performed my install by mounting the stepped brackets underneath the fender, but I believe that a similar approach can be used without the fender, even if the screws are a little shorter. 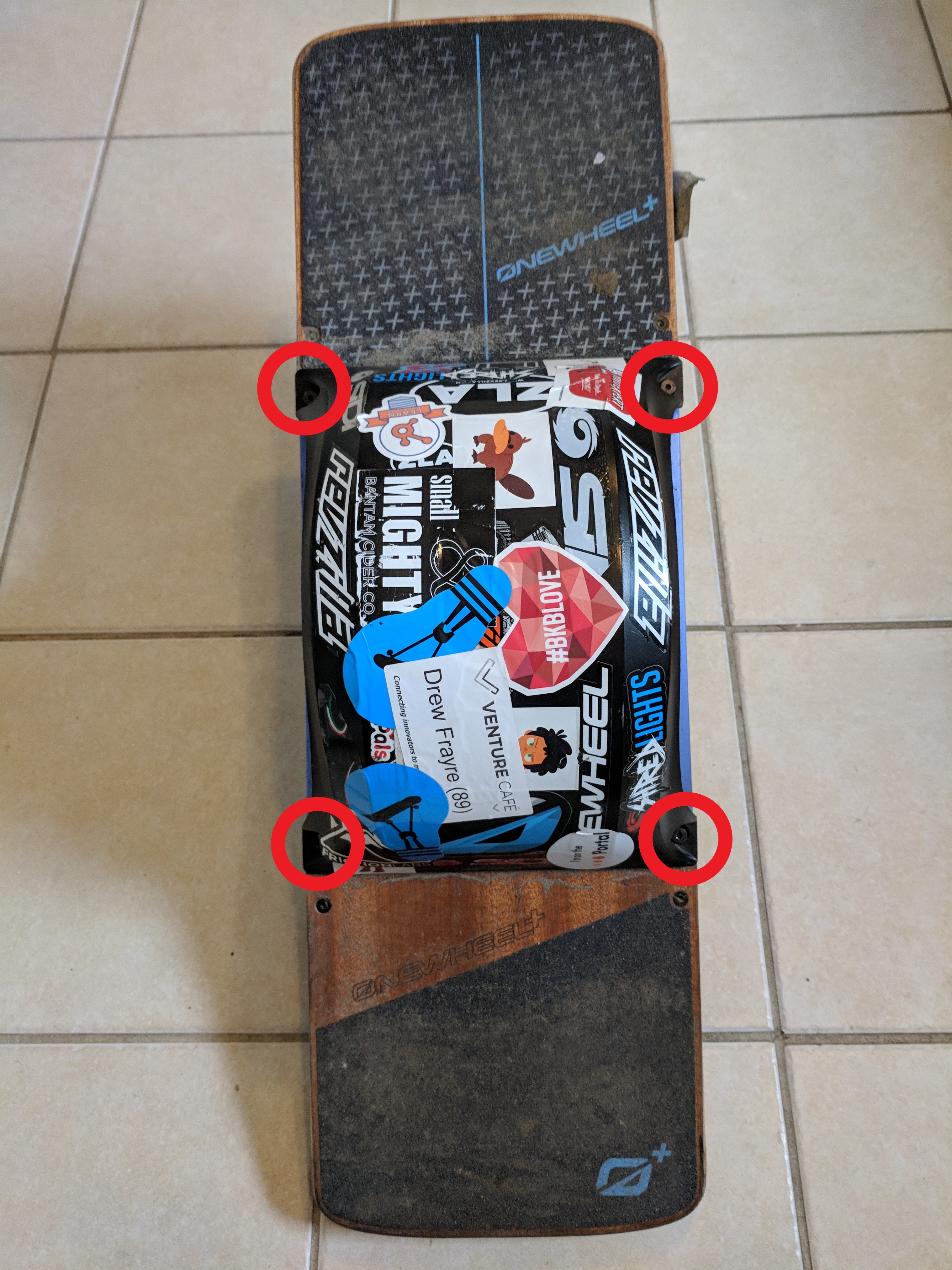 Next, you want to align your stepped brackets over the hole of the screw, and then replace any screws/fenders that you might have removed. With a flat bracket, you will not have any leverage when you attach your lights, so putting them on and taking them off will be very difficult as the bracket will rotate. As long as you attach your stepped brackets tightly, the “step” will keep the bracket immobilized along the rail of the OW and enable easy attachment/detachment of lights. 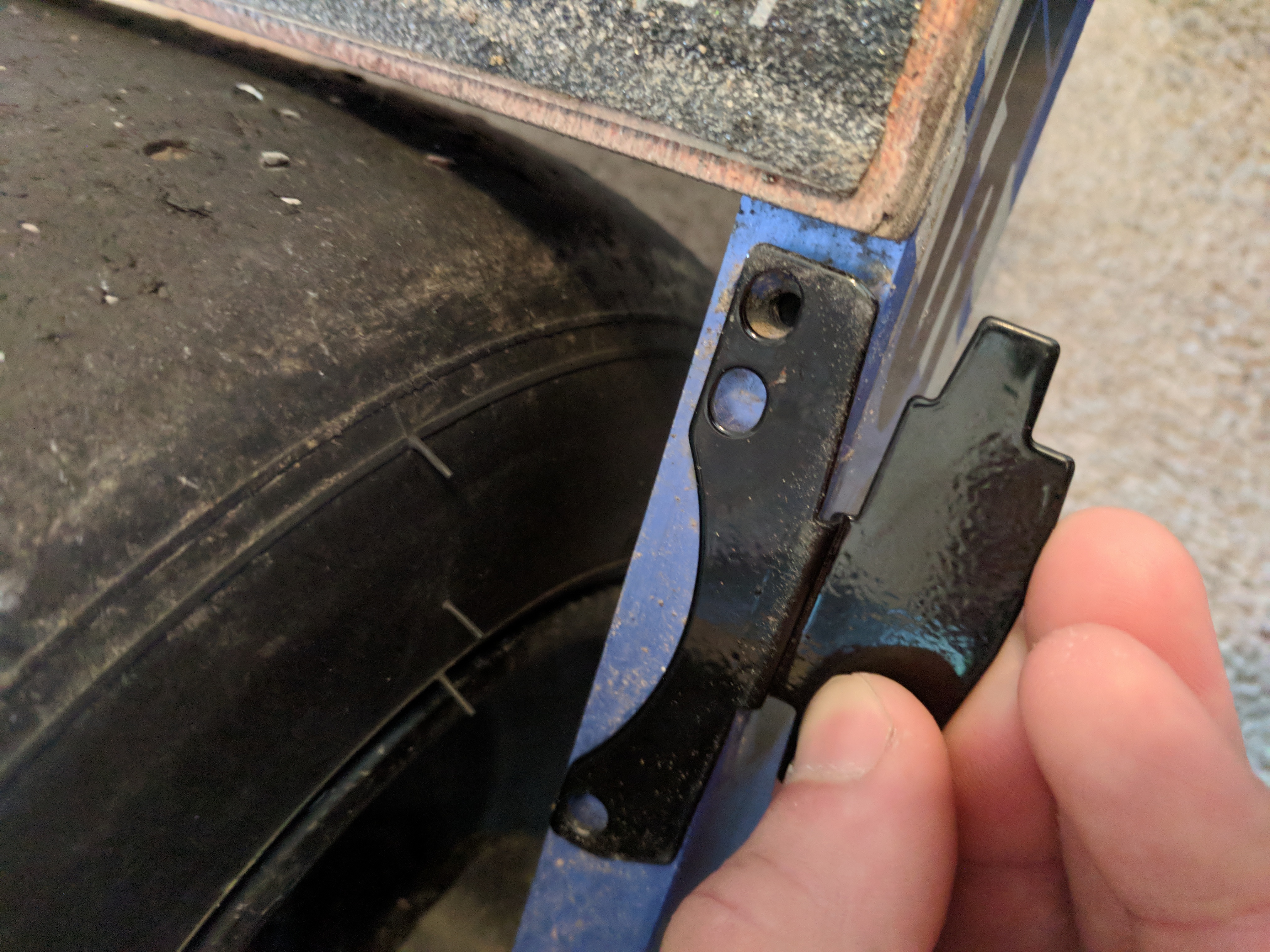 Finally, attach your ShredLights. First by pushing the side with the light up against the outer tab of each bracket, and then by pushing down (hard!) on the lens until the other side slips over the inner tab.

I realize that this is a tight fit and that some of the lights might appear a little cock-eyed, but I have yet to have a light fall off in over 40 miles of riding with this setup. ShredLights did a really good job making sure that their lights attach firmly and are also rugged and water resistant enough to stand up to the crazy stuff that comes flying out of a One Wheel’s wheel well. 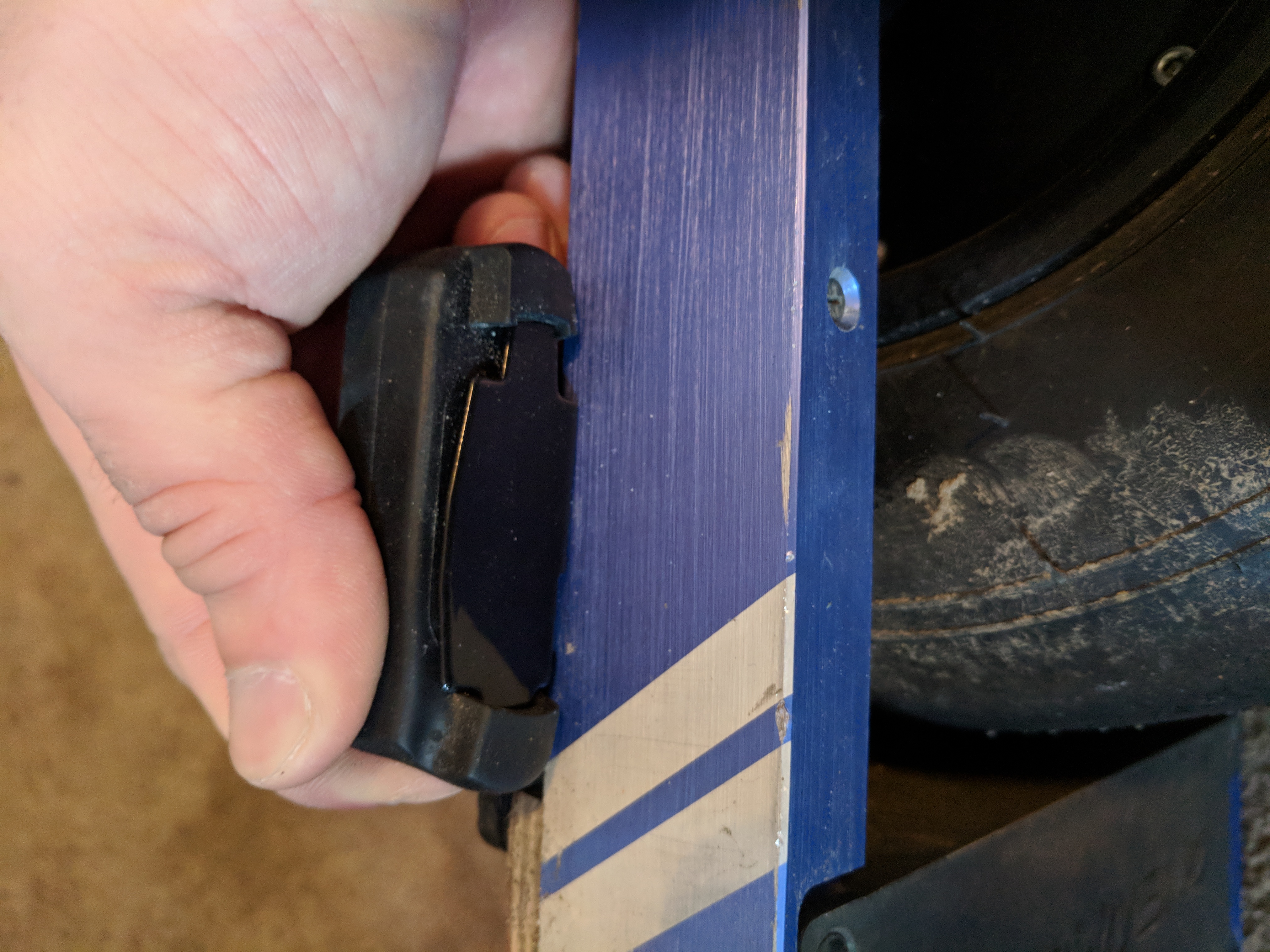 I have found these lights to be QUITE bright, boosting both my vision and visibility roughly 3x that of the stock lights. As an added bonus, I recently realized that my OneWheel’s stock tail light had gone out, and I was not very excited to send it back to Future Motion, so ShredLight’s products arrived at the perfect time.

It is true that your feet will block some of the beam coming off of the lights, but trust me, when you see exactly how many lumens these bad boys are pumping, “Are these lights bright enough?” is not going to be a part of your vocabulary.

Peep some extremely rare video footy of me commuting home at night with the ShredLights a’blazing. (note the enormous “V” of light coming out of the front of the board)

Aaaaaaand that’s why I stick to written content, sorry to subject you to that…

Until next time, keep it steezy boys and girls. 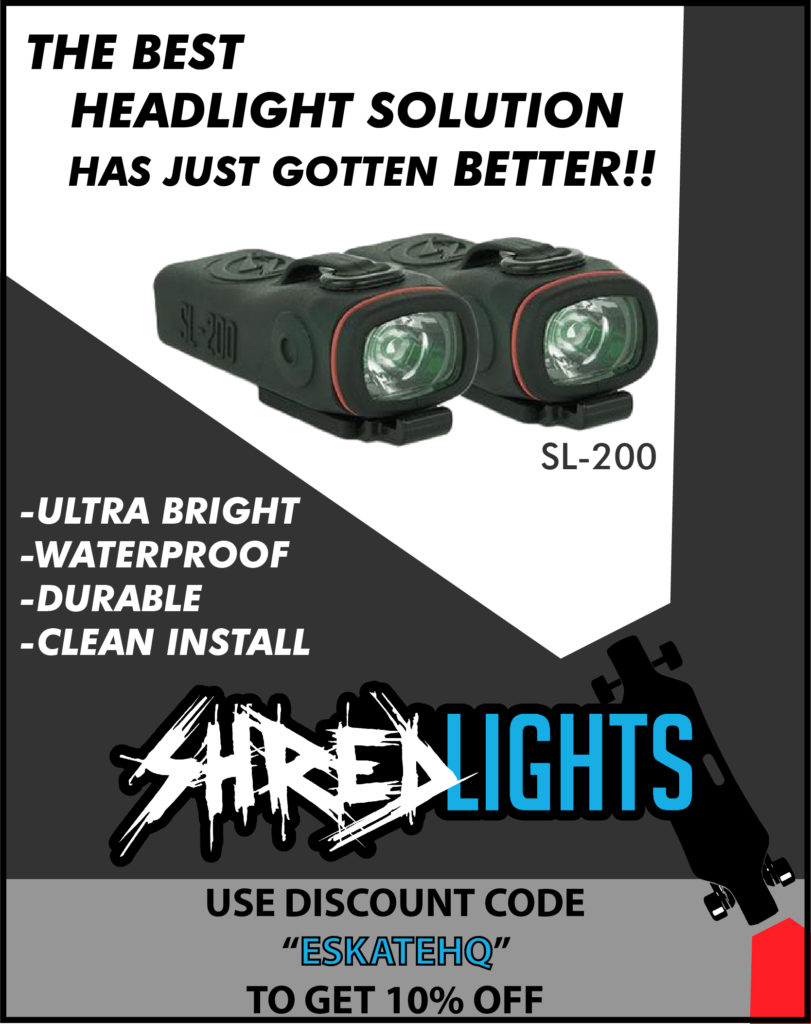 Use “ESKATEHQ” promo code during checkout to receive a discount at check-out!